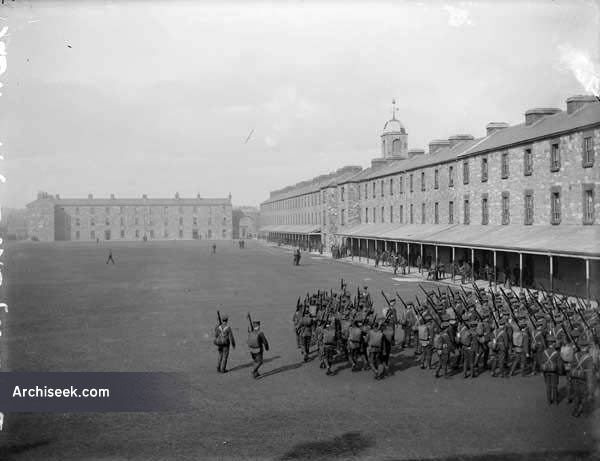 Building of Richmond Barracks started in 1810 and it was occupied by the British Army from 1814. It was named after The 4th Duke of Richmond, Charles Lennox. Described in 1837, “The Richmond barracks, near Golden Bridge, on the bank of the Grand Canal, have accommodation for 76 officers of infantry and 1602 non-commissioned officers and privates, and an hospital for 100 patients. The Porto Bello cavalry barracks, on the Grand Canal, are adapted for 27 officers and 520 men, with stabling for 540 horses, and an hospital for 40 patients. The barracks in the Phoenix Park, for infantry, have accommodation for 10 officers and 250 non-commissioned officers and men. Connected with the powder magazine are accommodations for one officer of artillery and 18 men.”

The 1916 Easter Rising was one of the most important events in the history of Richmond Barracks. All those arrested were taken here, including the leaders who were held in the gymnasium prior to their court martial. As the executions relentlessly continued, and with growing unease in the British Parliament, Prime Minister Asquith visited the Barracks on the 12th May 1916.

After the Irish Free State was founded in 1922, the Barracks was occupied by the Irish Army, replacing the King’s Own, the Welsh Regiment and the Shropshire Regiment, and it was renamed Keogh Barracks, after Comdt Tom Keogh who fought in the War of Independence, and was killed by a mine in 1922. The Irish Army closed Keogh Barracks down in 1925.

The building came into possession of the Dublin Corporation in 1924 and was used to house Dublin families who were on the housing list, they named it Keogh Square. The emphasis was more on economics than suitability and it soon degenerated into a slum. It was demolished in 1969, and this was replaced by St. Michaels Estate, itself since demolished.