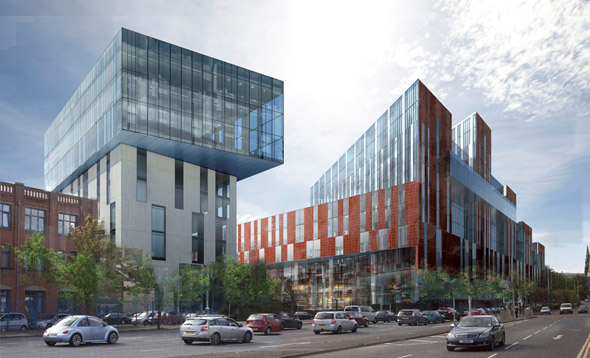 The University of Ulster has unveiled its vision of a vibrant 21st century campus in the heart of Belfast, built around the existing campus in York Street. The design by FeildenCleggBradley Studios is dominated by glass frontage and is built at different levels to complement existing buildings like St Patrick’s Church in Donegall Street. It will be approximately 75,000 square metres in size, on York Street and Frederick Street stretching to North Queen Street and include four linked buildings with entrances from York Street, a reopened York Lane and Frederick Street.

The Vice-Chancellor, Professor Richard Barnett, explained while unveiling the vision: “It is very important to us that this design is not simply facing the city centre. It will be accessible from a number of points, inviting those communities which border the development to the north of the city and other parts of Belfast to come inside. We hope that it will become their gateway to the city centre. The new development also sends a strong message to the business community that the University values its engagement with them, with a campus that will be on their doorstep, training staff and providing research and innovation expertise.”

Professor Barnett said the University was very excited by the landmark design developed by architects FeildenCleggBradley Studios for its new campus. Their work not only draws on the rich architectural heritage of Belfast but is sensitive to the surrounding cityscape, he added.

Professor Barnett explained: “While the architecture of this new civic building is important, it is the activity inside it which will ultimately determine the success of this development. Equally important is that the internal structure of the building meets the requirements of 21st century higher education.

Professor Barnett confirmed the University will formally submit its planning application later this month. The Department for Employment and Learning announced a funding contribution of £16million in March 2010 to support the Belfast campus redevelopment. The York Street site will house 15,000 full and part-time students and staff from Jordanstown and Belfast. Construction is expected to start in 2013 and the first students will move in by 2015.