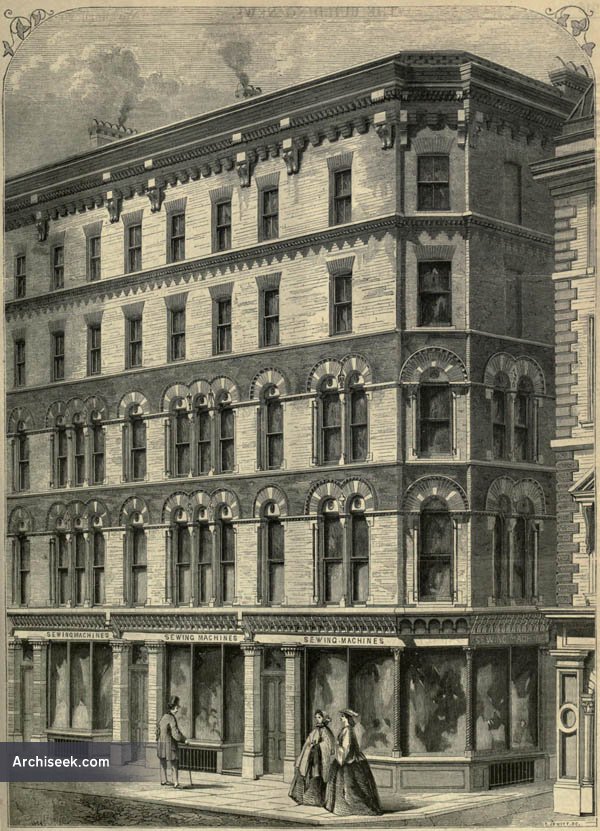 From The Building News: “AN architect’s responsibility in the design of a building varies in pro- portion to the importance of the thoroughfare in which it is erected The structure if reared in a back street, away from the great channels of communication, is not likely, unless it be something extraordinarily- striking, to influence many people, either for good or for ill ; but in the high street of a great commercial city it stands for years a model or a warning, with all its merits and imperfections unveiled to every observer. Private buildings are more likely than public ones to operate upon the general taste, because they more closely resemble the buildings which ordinary men require, and the style as exemplified in them may be readily comprehended, when it would be difficult to anticipate a redaction of the style seen in a public building to the dimensions of a 20-feet frontage, such as most people require in our streets.

Our street architecture is not, taken as a whole, particularly meritorious. Circumstances produce it totally unconnected with the ability of our architects. Individual caprice and independent rights cut it too frequently into so many vertical slices of brick and cement in which no attempt at harmony with neighbouring houses has been attempted. Something to catch the eye of a customer is the great desire of all tradesmen, and ideas of architectural beauty have to be sacrificed to it. Even where a block of houses and shops have been built together from a single design, the individual lack of taste and the yearning for display, break out in the obtrusive shop-fronts, and supersede the architect’s good intention. The signboard writer completes the incongruity.

Mr. F. Warren, the architect of the new shops at the corner of Lawrence-lane and Cheapside, — of which we give a view on another page — appears to have taken some precaution against his work being thus injured by subsequent meddlers. He has not left the shop fronts to be designed and put in by each respective shopkeeper, which is too frequently done so that the owner may have some security for his rent, but he has designed the shop cornice throughout, and we imagine has inserted some stipulation ia the lease against the unharmonious decoration of the facia. The consequence is, that the name and title of each establishment is tliere inserted on a uniform plan, and to a similar scale. Further than this, the shop sash is not brought out to the utmost limit permitted, to gain a few inches of extra room in the shop, but the iron columns which support the several brestsumme is are conspicuous on the outside. This arrangement, if shopkeepers only knew it, by throwing a shadow under the frieze, is far better than the one ordinarily and ignorantly adopted, for displaying the brilliancy of the exhibited articles. It satisfies also the architect’s eye, inasmuch as there is the effect of a solid, substantial support, instead of a mass of plate glass for the palpable weight above it.

Mr. Warren’s building bears evidence of artistic thought. It is novel without being extravagant, and rich without being costly; the ornament is simple but effective. This latter peculiarity is more especially seen in the form of the columns which divide the windows, in the sunk lines of the springing stones, and in the notching of the splays round the window heads. ‘The rest of the building is built of white and red brick, which are blended with skill. The weakness of the design is the comparative plainness of the two upper stories, but spite of this it has merits, and shows plainly that the humblest material is no obstacle to the development of design.

We have also engraved an enlarged sketch of the cornice. It may appear to some of our readers a little heavy, but it is not so in reality. Viewed from the permissible points — limited by the narrowness of the street — it appears a becoming crown to the building, and the avoidance of great projection in this, as well as in the other portions of the building, is additional evidence that Mr. Warren has considered the site, as every architect ought to do, whilst designing the structure which now covers it.”