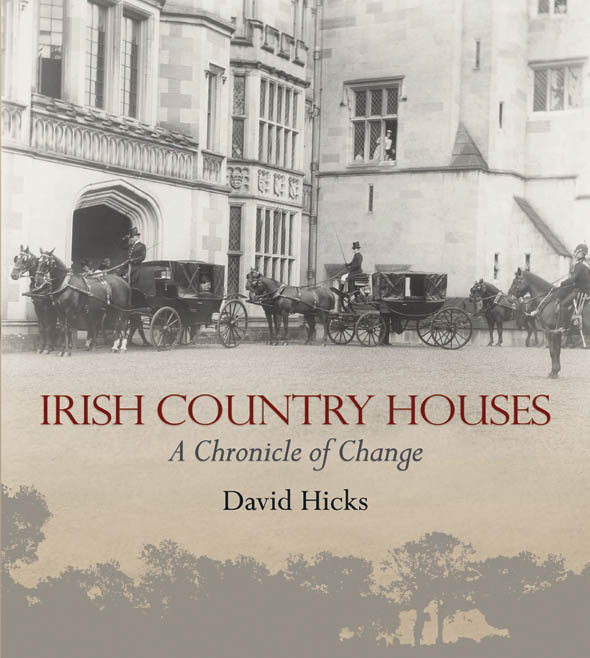 Property has long been the national obsession. Stories of lavish spending, gross over-borrowing and large, rambling piles might bring to mind Celtic Tiger era Ireland, but this theme goes back much further than that. Eighteenth century Ireland was a land awash with wealth for members of the small but dominant Ascendancy elite, as landlords experienced a lucrative economic boom. This was the heyday of the Irish country house; an architectural masterpiece and the centrepiece of each great estate.

While once symbols of wealth and power, the social and political upheaval of the early twentieth century left the Irish country house adrift in a changed land. Family feuds, careless heirs, recession and war ensured that only the most resourceful or fortunate houses survived.

The Collins Press now presents this rare glimpse into a golden age long gone. David Hicks was granted unprecedented access to country houses, castles and previously unpublished photographs to produce this visual record, chronicling their social, political and architectural history. Written by David Hicks, a designer and architectural technician, he noticed as he travelled around Ireland, that nearly every town had a ruined house or castle that belonged to a once-wealthy family. Research into his family background led to investigating the history of these country houses and the circumstances of their downfall.

By mirroring period photographs with contemporary images, he illustrates the changes that have been wrought on these buildings and provides a remarkable bird’s-eye view into a now vanished age of unequalled prosperity. One cannot comprehend what has been lost in terms of Ireland’s architectural heritage until a comparison is made between period images of houses and recent photographs of what remains.

But this is also a story of rebirth and revival. Some of these fascinating edifices have survived and have been transformed into public buildings or hotels. Áras an Uachtaráin has overcome threats of demolition and Lough Eske Castle in Donegal was recently restored after a fire left it in ruin.

Irish Country Houses delves into the histories of these buildings and the conditions that led to the dissipation of the wealth that created them. Dramatic tales from this secret world are recounted, including kidnappings, fires, contested wills, philandering and the running up of massive debts.

Certain to appeal to enthusiasts of history, heritage and architecture, Irish Country Houses is an exquisite record for future generations. A fabulous gift and a book to treasure, it invites us to explore the stunning beauty of these stately buildings and the stories of some of the eccentric people who once called them ‘home’.

Irish Country Houses: A Chronicle of Change by David Hicks is published by The Collins Press, price €39.99. It is available in bookshops and online from www.collinspress.ie