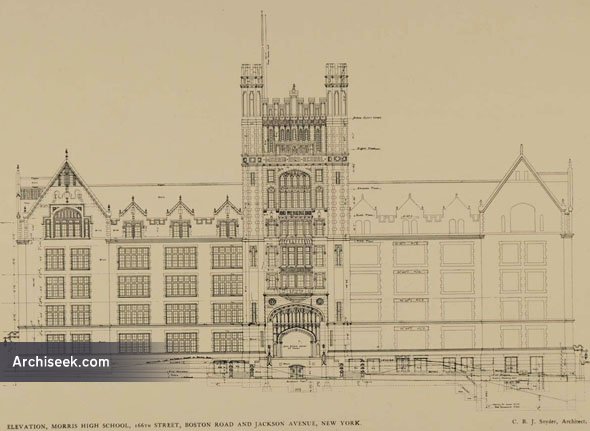 Considered by many to be C.B.J. Snyder’s masterpiece, it is situated at the highest point in the Bronx. A modified ‘H’-or ‘E’-shaped plan includes the long rectangular central block from which the great central tower rises, projecting end pavilions and the elaborate apsidal auditorium which extends from the center rear of the central block. The building sits on a high raised basement and rises five stories to include an attic floor level.

The great central tower, which can be seen from long distances, rises to a height of approximately 189 feet. Octagonal corners rise to form elaborate turrets pierced by lancet windows. The school’s main entrance, a two-story Tudor arch opening with tracery windows and clustered-pier door surround is set at the base of the tower. It is approached by a generously proportioned double flight of steps. A three-story oriel extending from the third through the fifth floors is surmounted by windows similar to those in the gable ends. A band containing the inscription “Morris High School” is placed above this.

Now known as the High School For Violin And Dance.