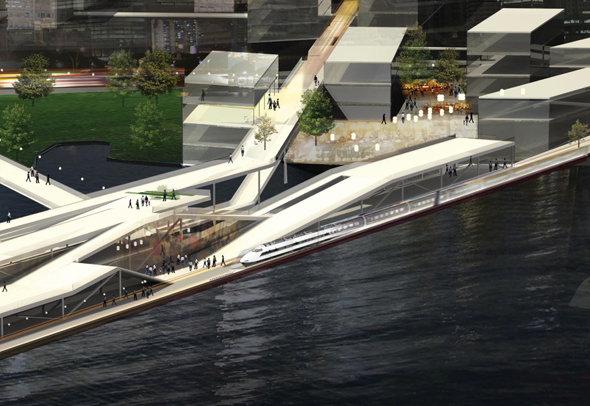 A graduate of UCD School of Architecture, Emer O’Daly, has recently won the Why Stop international competition in Boston. She will be presenting her proposal at the SHIFTboston Why Stop Forum at South Station in Boston on 19th January to select members of the jury, government, community and business leaders, local developers and regional economic development groups.

This international competition generated interest from 12 states and 10 countries. Winning and honorable design proposals will be on display at South Station from January 16 – January 30 as part of the traveling WHY STOP Exhibition exhibition which will move to select locations in New Bedford and Fall River. The project will become part of the SHIFTboston WHY STOP book in 2012 and will also be featured in a new game for mobile devices.

The competition was launched in September 2011 by SHIFTboston to investigate opportunities along the South Coast rail extension intended for construction in Southern Massachusetts. The competition challenged urban designers and architects to explore and visualize destinations along this new commuter network which will connect Boston to the towns of Taunton, New Bedford and Fall River. This competition was organised in partnership with the Boston Society of Architects.

The proposed South Coast Rail extension will connect Boston city with towns in southern Massachusetts. The town of New Bedford is the end of the line in this new infrastructural network. Currently, the proposed train station is positioned north of downtown, cut off from both the waterfront and the community it will serve. Although it would be more advantageous if the station was positioned closer to downtown, the required 800ft platforms are difficult to fit in any closer location. However, if the station was rotated out into the river, in the form of a pier, it can be moved adjacent to the downtown area, better integrating with the existing infrastructure and reconnecting the town with the sea. This Super-Pier would be both a public amenity and a source of economic development for the locality of New Bedford. The pier would house a train and ferry terminal as well as provided space for landscaped parks and open markets for local food production. It also opens up the possibility of cultural and performance spaces on the waterfront. The pier would become a hub of activity to which visitors would have easy-access by rail, car or ferry. In this way, a new waterfront urban centre may be defined for New Bedford ensuring its establishment as the primary infrastructural hub of southern Massachusetts and the South Coast Islands.

After graduating with a B.Arch from UCD in 2004, Emer O’Daly worked for Heneghan Peng for five years. She is currently teaching in UCD and UCC, writing a chapter for a book on fractal geometry and architecture, and painting in Dublin. Emer O’Daly received support from The Arts Council while developing this proposal at Yale, while obtaining a Masters in Architecture.