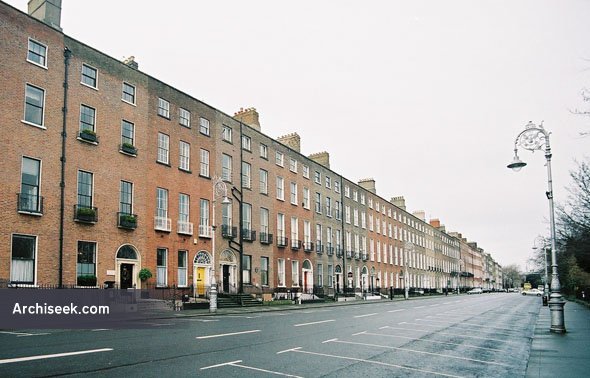 The Irish Georgian Society welcomes Fáilte Ireland’s new initiative for Merrion Square which aims to promote it “as a unique and vibrant cultural destination and tourist attraction”. However, the Society contends that this exciting celebration of Dublin’s architectural heritage will be undermined by the continued use of one side of the square as a parking lot by Dublin Bus and by private coach companies.

Lying at the heart of Dublin’s south Georgian core, Merrion Square constitutes one of the greatest surviving assemblages of eighteenth century residential buildings in Ireland or Britain and is rightly celebrated on this basis. Fáilte Ireland’s initiative is reflective of the emergence of cultural tourism as an important and sustainable part of tourism in Ireland today. It is also consistent with the inclusion of the Historic city of Dublin in the UNESCO tentative list of World Heritage Sites.

Given the recognised significance and tourism potential of Merrion Square, it is remarkable that its south side, forming an essential part of the formal vista between Leinster House and St. Stephen’s Church, remains cluttered with double-decker buses and with tourist coaches. Since the arrival of the former on the square in early 2011 the Irish Georgian Society has been calling for their relocation but so far no action has been taken.

The presence of these buses on the square runs counter to the provisions of the Dublin City Development plan and is symptomatic of the long standing consumption of historic spaces in the city for bus parking – Parnell Square and Mountjoy Square serve similar purposes.

Dublin’s architectural heritage presents an unique offering to cultural tourists and, on the surface at any rate, it would seem that there is generally a clear recognition of this fact. Fáilte Ireland’s new initiative for Merrion Square is indicative of this as are the policies of the Dublin City Development Plan and the inclusion of the historic city in the tentative list of World Heritage Sites.

In practice, however, it is often possible to think that there is a lack of joined up thinking in the actual management of the city’s historic built environment and the continued use of Merrion Square as a bus park is a keen reminder of this situation.

The Irish Georgian Society sees Merrion Square as one of Ireland’s great architectural treasures and considers its preservation and proper management as being of benefit to the country as a whole. For this reason, and so as to facilitate the success of the Fáilte Ireland initiative, we call on Dublin Bus and other authorities to immediately find an alternative appropriate location for parking buses that serve the city centre.