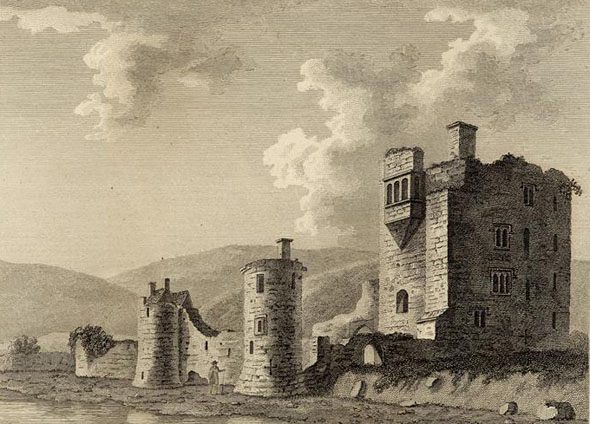 Grannagh Castle is located on the northern bank of the river Suir just outside Waterford City. Believed to have been built by le Poers who had been granted the whole of Waterford and southern portion of Kilkenny after the Norman invasion in 1169. But after they lost favour with Edward III, the King granted it to James Butler, the 2nd Earl of Ormonde in 1375.

The castle comprised a large, square, walled enclosure with cylindrical corner towers. The landward side was later rebuilt by the Butlers of Ormonde, but the old river facade (late 13th century) survives complete with its south-west tower, parts of the north-east tower and the connecting wall. In the late 14th century the Butlers built a tall tower house in the north corner of the old castle and this was later extended by the addition of a two-storey dining hall. The oriel window, high up in the tower, was added in the 17th century. The castle has some remnants of sculpted ornamentation, including an angel holding the Butler arms which decorates the inside arch of the window from which Margaret, the great Countess of Ormonde, hung rebels. There is also a fine carving of St. Michael the Archangel with the scales of justice.

In 1837, Lewis recorded that “”Granny or Grandison Castle, in Iverk, is one of the most considerable: it was the residence of Margaret Fitzgerald, the great Countess of Ormond, a lady of uncommon talents and qualifications, who is said also to have built the castles of Balleen and Coolkill, with several others of minor note. ”

Over the centuries, it became very delapidated, as locals used the stonework to built cottages. In the 19th Century its then owner George Roche of Limerick carried out repairs in 1824. The Board of Works did some further restoration in 1925.