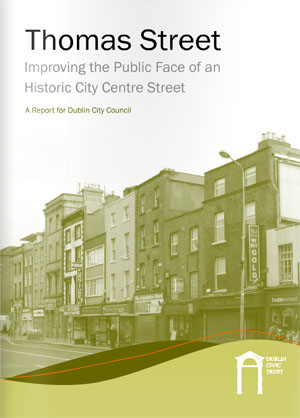 Commissioned by Dublin City Council, the study, entitled Thomas Street – Improving the Public Face of an Historic City Centre Street, constructs a future for the historic thoroughfare in Dublin 8, which has suffered from urban blight, dereliction and vacancy, including during the recent economic boom period. The 112 page report puts forward a three-pronged vision for Thomas Street: Create a high quality urban setting that showcases the architectural diversity of Thomas Street and creates a comfortable, interesting and visually attractive pedestrian experience; Heighten the cultural and tourist potential of Thomas Street and The Liberties; and enhance the market profile of the street and propose an effective mechanism to manage and promote Thomas Street.

Chief Executive Officer of Dublin Civic Trust, Geraldine Walsh notes that: “Thomas Street is the commercial heart of the Liberties and one of Dublin’s most historic streets. This has been recognised in recent studies conducted by Dublin City Council, including a major Local Area Plan, however there are now limited funds to implement initiatives of this kind. What we have done with this study is focus specifically on Thomas Street as the public face of the Liberties, and brought a recognition to the fact that most change can be driven by individual stakeholders on the street – the building owners, businesses, traders and residents. It is these efforts on the ground that effect real, meaningful change.”

Conservation Research Officer with Dublin Civic Trust, Graham Hickey added “Thomas Street is all too commonly perceived as a decrepit route through the Liberties, whereas it is in fact a street of enormous significance to Dublin. Not only is the route grounded in over 800 years of the city’s evolution, but the scale and hierarchy of its churches and institutional complexes lend the street a remarkable grandeur and status within the city. Its stimulating streetscape scene of fine grain merchant premises interspersed with imposing public buildings never fails to impress the visitor and citizen alike, and it is this unique resource that this report seeks to highlight to commercial and cultural advantage for all. There is enormous scope to build on this asset by developing quality retailing, services and visitor attractions that complement this character and develop an unrivalled brand for the district.”

The report follows on from Dublin Civic Trust’s long-term involvement in the area, which has included achieving an Architectural Conservation Area designation for the district and writing a book on the history of Thomas Street. Geraldine Walsh notes: “Unfortunately since the book was written in 2001, many of the architectural qualities it highlighted have since been eroded – you would never think that one of the most prosperous eras in economic history had even occurred here. The boom bypassed Thomas Street, leaving it open to site assembly and the resulting dereliction we see today. This has had considerable economic impact, as businesses gradually closed and footfall decreased. Thankfully, we are beginning to see a turnaround in this negative cycle – something that now needs stimulation through improving the public realm, promoting business and harnessing the cultural assets of the street.”

Graham Hickey says: “In spite of the losses of the twentieth century, Thomas Street retains a fascinating tapestry of early buildings that simply do not survive elsewhere in the city. This includes the Frawley’s terrace, proposed for demolition in 2008 and saved by the Trust on appeal to An Bord Pleanála, where the important early eighteenth century mansion of banker Joseph Fade still lurks behind deceptive peeling render, while formerly gable-fronted ‘Dutch Billy’ houses survive in the midst of The Digital Hub’s holdings further along the street. What makes Thomas Street so exciting is that it constantly reveals new information about the early structures of the city, hidden behind modified merchant facades. Only late last year we discovered a giant timber cornice, commensurate to a prestigious mansion dating to about 1700, in one of the most unassuming buildings on the street. This is what we have aimed to showcase in the study with a series of architectural visualisations, highlighting the quality of what we have here, as good as any continental city. It’s all about identification and changing perceptions.”

The report can be read online here.