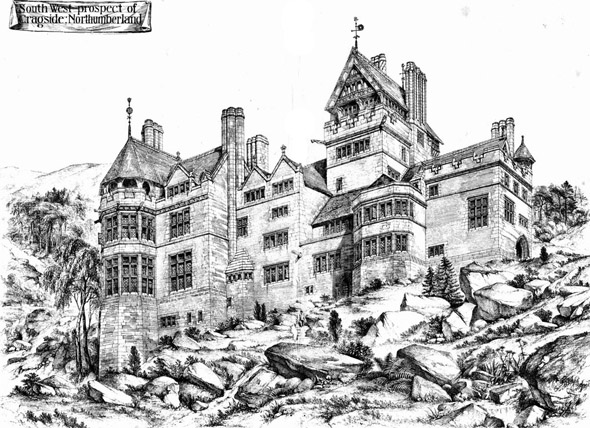 Designed for Lord Armstrong – Victorian inventor, innovator and landscaper. Cragside house was truly a wonder of its age. A Victorian fantasy – its Tudor-style wood beams, turrets and Neo-Gothic arches built into the steep hillside that’s covered in tall dark trees. The interior is noted for Morris stained glass done to the designs of Burne-Jones, Rossetti and Madox Brown. This is the first house in the world to be lit by hydro-electricity. It is crammed full of ingenious gadgets with most of them still working. Cragside has been in the care of the National Trust since 1977. Illustration published in The Building News, May 10th 1872.

“THE subject of our principal illustration this week is from a drawing, now exhibiting in the Royal Academy, of Crapside. in Northumberland, the country residence of Sir William G. Armstrong. It is grandly situated on the side of a rocky hill about one mile from Rotbbury. Nothing can exceed the beauty of the surroundings, varying from a rich dell in the bottom of the valley, filled with every variety of rare tree and shrub, all in full vigour, up to the boldest rocks and moorland on the hill top. A shooting-box was built here a few years ago, but as it soon proved far too small, the present works were commenced about two years ago. A wing was first added, of which the large bay window, with balcony and high roof, shown in our view, forms a part. This contains large reception rooms, with two floors of bedrooms over, and a complete system of baths in the basement. The library and dining-rooms arc each large and lofty, and in their finishings are exceptionally rich. The former has a very elaborate ceiling of oak, inlaid with walnut, and further enriched with carving, and a frieze of fruits and flowers painted on a gold ground. The room is panelled with walnut, and fitted with dwarf bookcases all round. The chimney-piece is of the finest Egyptian onyx, set in a frame- work of Emperor’s red marble, and was made by Forsyth. The grate was supplied by Messrs. Benham & Son, and is from a design, by Mr. Stevens, of singular splendour and originality. The upper parts of the windows are filled with stained glass by Messrs. Morris & Co.. and consist of the “Story of S. George and the Dragon,” and several figures of poets.

In the dining-room is a large ingle-nook surrounding the fireplace, of which a drawing is exhibited (No. 1211′). and which is very rich in marbles, carving, and stained glass. This room is also panelled with oak, the top row of panels carved by Forsyth, with fruits and flowers. The ceiling is of oak, formed with massive beams and moulded joists.

The tower shown in our view (a bird’s-eye view of the upper part of which is exhibited: No. 1219) is in course of erection, and will soon be complete. Considerable additions are also in progress at the rear, which are not shown in our view. In the basement is a powerful and ingeniously devised heating apparatus, for warming the whole house generally, and each of the principal rooms separately. It is worked by a small hydraulic engine, and only requires attention once in twenty-four hours. It is capable of the nicest adjustment, and can be worked at any speed, sometimes so slow as just to keep the water flowing in the pipes, and at others so as to obtain the full heating power. The whole of the works have been carried out by Sir William Armstrong’s own workmen, and to a large extent under his own immediate superintendence and that of his agent, Mr. Bertram. Mr. Norman Shaw is the architect of the building, and the author of the illustration, which we have endeavoured though not very successfully, to reproduce by photo-Iithography. All who admire rich architecture and splendid drawing should see the original in the Royal Academy. We hope, before long, to give some more specimens of Mr. Shaw’s masterly work. “