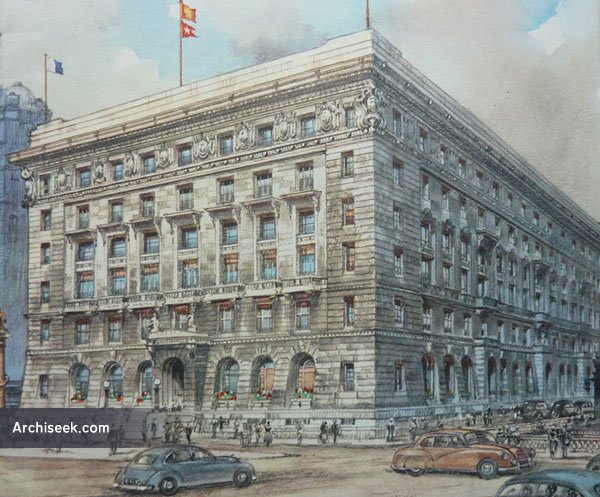 Constructed between 1914 and 1916, and one of the Pier Head’s ‘Three Graces’, the Cunard Line’s head office for 60 years from its completion in 1917 until the Company’s move to Southampton in 1967. The structural form was prominently based upon American Beaux-Arts buildings such as those in New York, constructed from reinforced concrete, which was then clad in Portland stone. Highly detailed sculptures adorn the outside of the building, including Britannia, Neptune, and others representing peace, war, and storms. Another series of sculptures on the building depict different races from around the world, which reflect the global operations of the Cunard company.

In 1934, the Cunard Steamship Company merged with the White Star Line to form Cunard White Star Line, which became the largest passenger steamship company in the world, helping to make Liverpool one of the most important centres of the British trans-Atlantic ocean liner industry. The Cunard building subsequently acted as the central headquarters for the newly merged firm, with both administrative and ship-designing facilities located within the building. Many ships and liners were developed and designed within the Cunard Building, including the RMS Queen Mary and RMS Queen Elizabeth.

Given that Liverpool was a major trans-Atlantic port and due to the building’s proximity to the River Mersey, the lower floors of the Cunard Building were allocated to provide space for cruise liner passengers, both prior to and after sailing. The former first class passenger lounge is located on the first floor. Grade II*-listed.