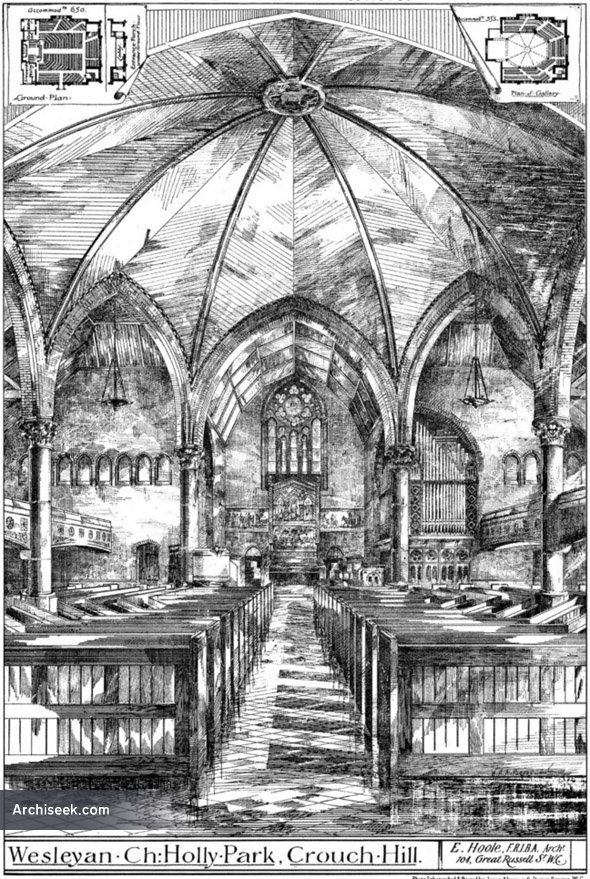 “This building, tenders for which appeared in the Building News on 6th May last, is now in progress. The nave is octagonal, an aisle being carried round it, except at the eastern side, where a chancel is formed. The benches are arranged so as to face the pulpit, the passages to these in the aisle being in the shadow of the columns, so that there are no seats from which the preacher cannot be seen. The slope of the ground necessitating an ascent by steps to the nave floor, a porch was formed on the ground level under this floor at its western end. A north porch gives access from a side road to the chapel without steps. Provision is made for a gallery, which can be added whenever required, and will be carried on segmental stone arches springing from the nave piers. Without the gallery, the accommodation is for 650 persons, and with it for 1,000. The materials used are red brick and Bath stone. These will appear in the internal facing also, as the walls are to be unplastered. A wooden vaulted ceiling will cover the nave, the aisle and chancel ceilings being panelled, and the space thus gained between ceiling and roof will be used for ventilating purposes. Air will be admitted through vertical flues formed in the external walls, and will be extracted by ventilators in the ceiling. Messrs. Perkins’ hot-water apparatus will be used for warming the building. Messrs. Lathey are the builders, and Mr. E. Hoole, of 30, Russell-squarc, the architect.” Perspective view, & ground floor plan published in The Building News, October 7th 1881.