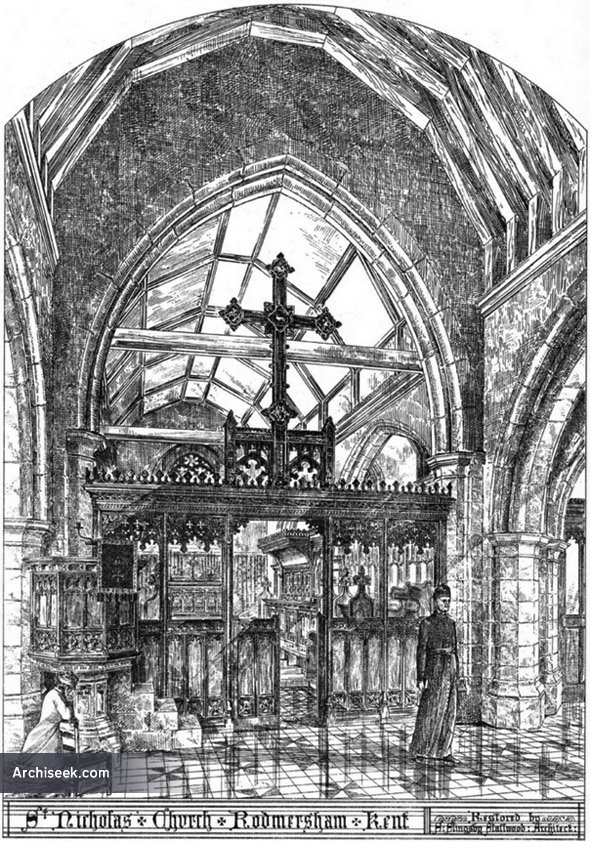 St Nicholas Church was started in the 15th Century and constructed out of locally quarried dark flint and stone. Indeed the church’s imposing tower is widely considered to be one of the finest examples of 15th Century tower building in the whole county coming as it does with a complete set of menacing gargoyles. Inside the church was extensively modernised by the Victorians but here and there medieval workmanship can still be found.

“The Church consists of chancel, south chapel, nave with side aisles, and a beautiful west tower. The complete restoration of the chancel and of the interior of the nave was carried out some four years since ; and during the demolition of the high-backed pews which completely choked up the whole of the nave, the architect (Mr. S. Slingsby Stallwood, now of the firm of Morris and Stallwood, architects, Reading), discovered portions of the old rood screen beneath the floor and amongst the pewing, the sill and parts of the lower panelling being actually in-situ serving to support the pulpit and reading desk. These interesting fragments were carefully pre- served, and the screen has now been restored on the old lines, and the ancient woodwork reused and taken as a guide to the new. The cross erected upon the screen measures 10 feet in height, and the four points contain sculptured representations of the four evangelists, with the Agnus Dii at the intersection. The church contains some very interesting 15th century oak screens and sedilia, all of which have been carefully repaired. The south chapel is private property and remains untouched, but the interior has been made “decent,” and, by the addition of a second altar, restored to its original purpose.” Interior view as restored by S. Slingsby Staffwood. Published in The Building News, December 9th 1881.