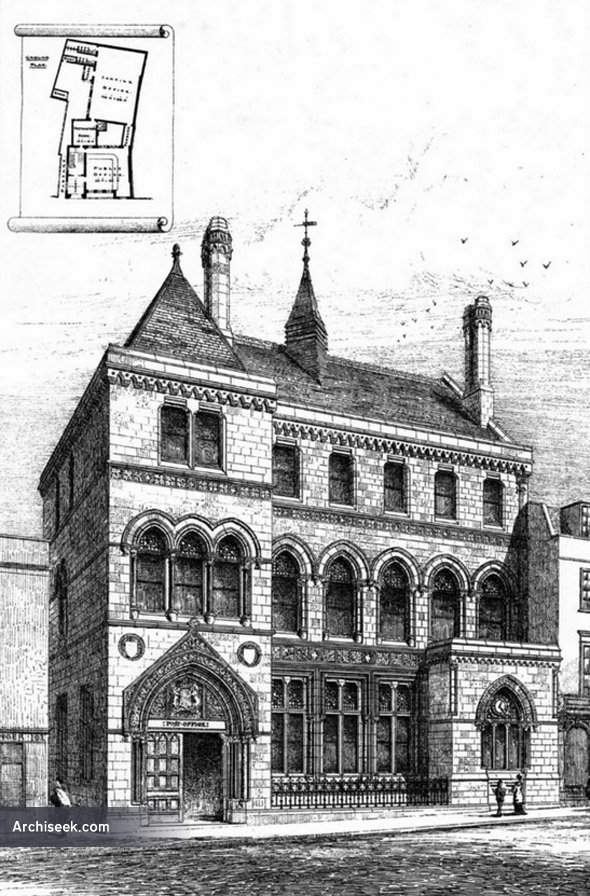 Still in use as a post office today, but sympathetically extended in the early 20th century, the building as designed is still visible. During the extension, the projecting part of the facade over the main entrance was extended upwards into a small tower. This has been since shortened. Image published in The Building News, August 22nd 1879.

“The design we publish emanates from Her Majesty’s Offce of Works, the architect being Mr. E. G. Rivers, surveyor to the board, under whose superintendence the work is now being carried out. The builders are Messrs. J.R. Symm and Co., of Oxford, and the clerk of the works is Mr. Henry Luff. On the ground floor, to the front, is the public office, a spacious apartment, 14ft. in height, and to the rear are the postmaster’s room, sorting office, lavatories, &c., &c. The sorting office is 60′ long, .38′ wide, and 1.5ft. high to the eaves, having an open roof, with iron trusses surmounted by a lantern. On the basement are the clerks’ retiring room, kitchen, heating apparatus, and battery rooms. The first floor will be occupied by the telegraph department, the instrument room being directly over the public office. The second floor will be devoted to the use of the caretaker and store-rooms. The materials employed are, for the walling, white bricks of Weal manufacture, and Chamark stone for the facework of the principal portion of the building. The columns to the front entrance are of Ross of Mull granite. The fittings of the public office, also the dado and doors will be of pitch pine. The public office and entrance lobby will have enriched ceilings in plaster. Ventilation is effected by means of flues in the walls, which admit air from the outside at about the floor level and discharge it into the rooms at a height of about 7ft. from the floor. Vitiated air is drawn off from the public office and rooms above by means of separate flues which communicate with a ventilating turret fixed in the roof space, in which three circular rows of gas burners will be fixed, thus affording ample means of extracting the foul air during damp cold weather. The public office, sorting office, and enrolment room will be heated by means of hot water pipes and coils. The public office and postmaster’s room will have a fireproof floor of Dennett’s construction.”