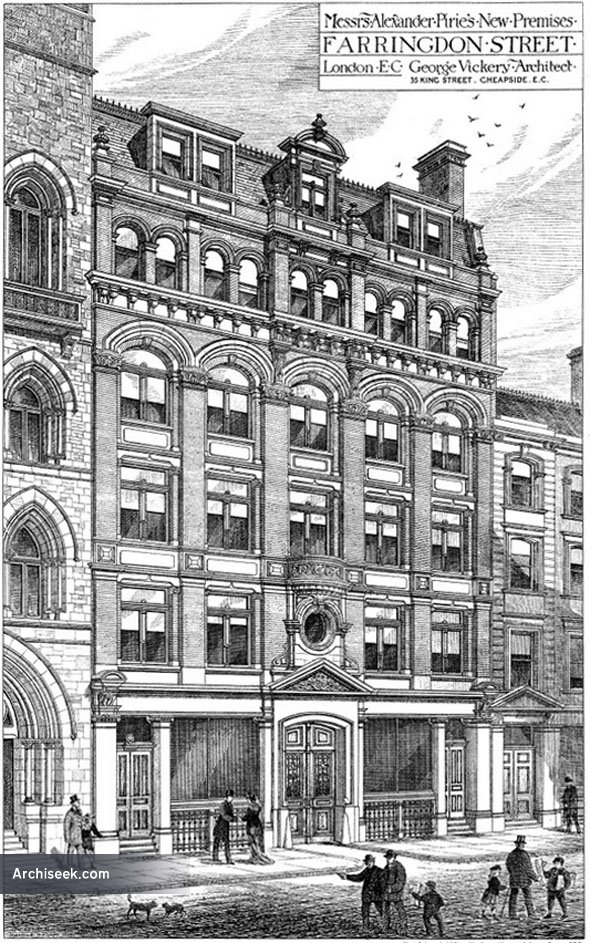 Published in The Building News, July 11th 1879. According to The Builder: “The warehouse referred to is to be occupied by Messrs. Alexander Pirie & Sons, of Aberdeen and London, the well-known paper manufacturers. In dimensions the frontage is 54 ft. in length; the height from the ground line to the top of the parapet is 70 ft.; the mean width of the ground built upon is about 70 ft. The style may, for want of a more precise term, be designated City Classical. The front is of red brick, liberally relieved with cornices, strings, and dressings of Portland Btone profusely carved. The front is in three bays with four principal pilasters from the ground to the parapet, where they are crowned with carved vases of Portland stone. The central bay, which includes the principal entrance, is extra enriched. The recessed doorway has a segmental head and a pediment filled in with carved work; over this, between the first and second floors, is a circular window, and, above it, a corbelled semicircular balcony projected from the front of the second floor, all this portion of the building being in stone. At each end of the frontage are pairs of oak ten-panelled doors, the central panel horizontal. These doors are square-headed, as are also the three-light windows, which have mullions and transoms, of the first and second floors; the windows of the third floor have segmental heads; the range of the fourth floor, closely coupled, are semicircular; the fifth floor is lighted by dormer windows, tbe centre one lofty, in stonc-work, and decorated. In addition to the enrichments already referred to, the others are, the cornice and entablature between the ground and first floors, the work in stone between the third and fourth floors, with the principal cornice and parapet. As is usual in warehouse construction, the largest quantity of light possible is provided, and the greater part of the area in the principal elevation is accordingly of polished plate glass.

Internally the construction is, as regards the floors, of iron girders supporting joists 11 in. by 3 in., laid 12 in. apart. The rooms are cased and ceiled with match-boarding, and have 2 in. beads in the angles. One special reason for adopting this style of finishing the walls and ceilings may probably be that Messrs. Pirie are large manufacturers of papers of very high qualities that would be injurtd by the exhalations from plastered walls. There are two flights of stairs from bottom to top of the building; the treads are of teak, 1} in. thick, with half-round fronts. The curbed roof is covered with countess slates.

The building has been designed by Mr. George Vickery, architect; Mr. F. Dash wood has acted as clerk of the works, which have been executed by Mr. Laurence, of Wharf-road, City-road, contractor.”