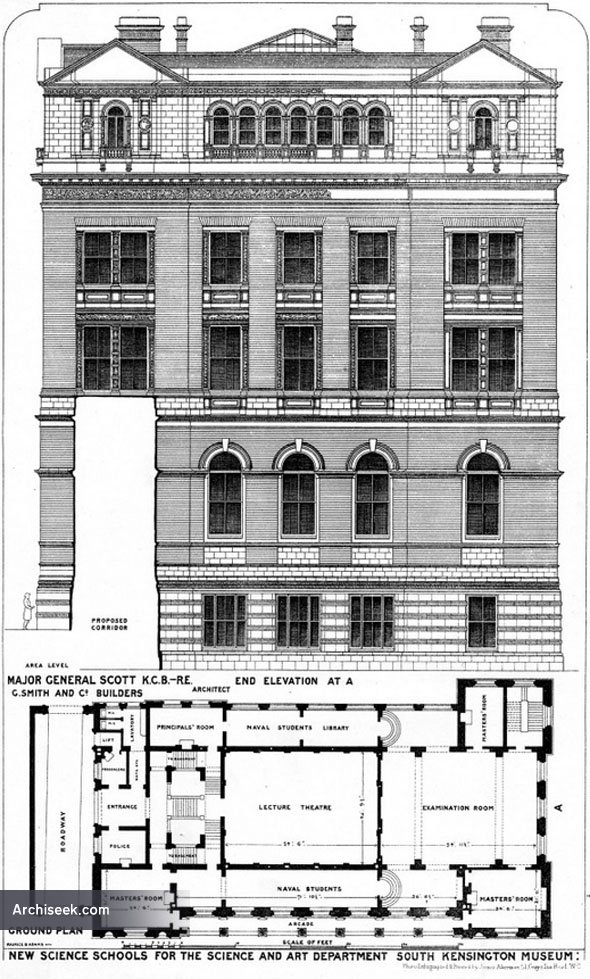 Designed for the Science & Art Department, elevation, and details published in The Building News, March 10th 1876. As Director of New Buildings at the South Kensington Museum complex, Scott delegated work, more often than his predecessor Francis Fowke. On more than one occasion the general forgot which of his staff ‘did the Architecture’ of an important museum building, where there was an atelier system in operation until at least the mind 1870s. It is now accepted that Scott completed the building with the assistance of James Gamble (exterior decoration) and J.W. Wild (interior arrangement). An elaborate decorative scheme was devised, based on Sykes’ decoration of the museum’s Lecture Theatre building. The terracotta columns on the ground floor exterior are identical to those on the Lecture Theatre front. On the top floor of the building are more ornate columns, producing an open arcaded balcony or loggia.

This building was the result of a successful campaign for the establishment of a School of Naval Architecture. The school was transferred to Greenwich in 1873, almost as soon as it had begun to use the new premises, and before the interior was entirely finished; and the building was occupied by a variety of scientific departments. Now known as the Henry Cole wing of the V&A.