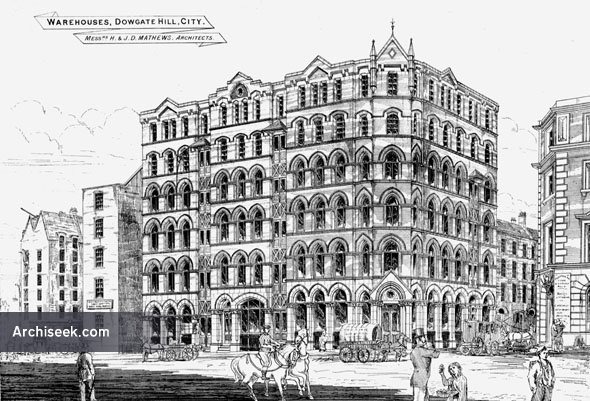 Perspective View or large commercial warehouses published in The Building News, March 8th 1872. “The block of buildings shown in the illustration consist of three warehouses on the west side of Dowgate-hill, corner of College-street, having a frontage to the former of l00ft., and to the latter about 55ft. The building at the corner is carried out somewhat differently to that shown in the drawing on account of legal proceedings being taken by the Dyers’ Company (whose Hall is on the opposite side of College-street), whereby the new buildings were prevented from being carried above the height of the old ones. Arrangements were, however, made that by reducing the width of the third storey 7ft., and the fourth floor 17ft., and also omitting the top storey entirely, the remaining portion might be built. This, as may be imagined, produces a very awkward appearance in the building, and detracts from the general design of the block.

Unusual difficulties presented themselves, on account of the ancient Walbrook occupying part of the site, and emptying itself into Dowgate Dock at a short distance from here ; and also by the floor of the basement of the third warehouse being about 2ft.9in. below the high-water mark at spring tides. The former was overcome by means of blue lias concrete under the walls and piers about 8ft. deep. The latter was met by covering the whole area with asphalte, and an asphalte skirting about 4ft. up the wall, thereby making a kind of waterproof pit.

The walls are built throughout with brick, and above the ground floor, faced with Suffolk bricks. Yellow malms are used in the spandrels of the arches. The jambs and arches are formed with moulded and cut bricks. The caps to the piers and the labels and other dressings are of Ransome’s concrete stone, and the whole of the ground-floor piers and arches are of brown Portland stone with caps carved by Mr. Sansom. The cast and rolled iron work was supplied by Messrs. Phillips. The general contractors were Messrs. Sewell & Son, of Aldersgate-street, and the architects Messrs. Henry & J. Douglass Mathews, of Cloak-lane, City. ”