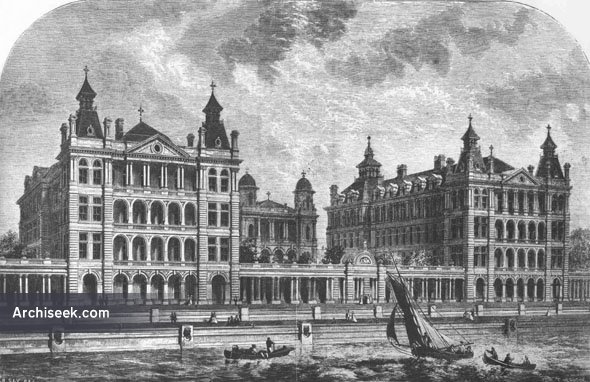 Constructed on a plot of land largely reclaimed from the river during construction of the Albert Embankment in the late 1860s, the hospital buildingswere designed by Henry Currey and the foundation stone was laid by Queen Victoria in 1868. This was one of the first new hospitals to adopt the “pavilion principle” – popularised by Florence Nightingale in her Notes on Hospitals – by having six separate ward buildings at right angles to the river frontage set 125 feet apart and linked by low corridors. Completed in 1871, the formal layout to the Albert Embankment was also designed to complement the Parliamentary buildings opposite.

The intention was primarily to improve ventilation and to separate and segregate patients with infectious diseases. There was a seventh pavilion at the north end of the site next to Westminster Bridge Road for hospital offices and a nurses home. Between the middle ward pavilions was the entrance hall from Lambeth Palace Road and chapel. The medical school was at the southern end of the site.

The northern part of the hospital site was severely damaged during World War II destroying three ward blocks. Complete rebuilding to designs by Yorke Rosenberg and Mardall was planned in the 1960s. As construction of the thirteen storey block commenced in 1975 there was a widespread public reaction against the scale and appearance of this building. The southern part of the redevelopment, which would have included a second tall block, was never constructed. The three remaining Victorian ward pavilion blocks were refurbished in the 1980s. They are now Grade II Listed buildings.