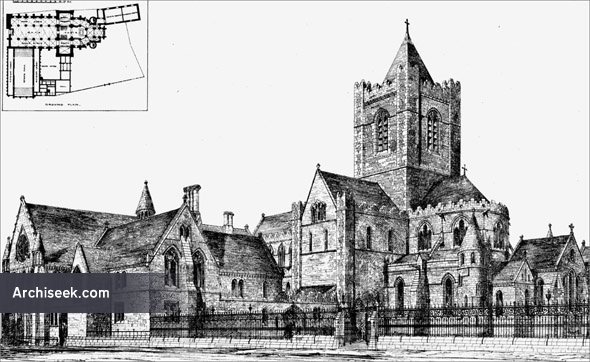 George Edmund Street was commissioned by the distiller Henry Roe to restore Christ Church Cathedral which was in very poor shape. There are remains in the grounds of a chapter house dating from the time it was a monastery church and the original long choir was removed in the 1870s by Street. As part of the design process, he produced this concept for a new Synod House alongside the cathedral. Never constructed, it was decided instead to create a new synod hall around St. Michael’s Church and connected to the cathedral by the picturesque stone covered passageway across Winetavern Street.

Illustration published in The Building News, May 26th 1871. “The Synod Hall, required to be about one hundred feet in length and forty feet in breadth, with division lobbies on either side, and, in addition, accommodation for committees, &c., would necessarily occupy a large area; .and there is only one part of the ground, on the south side of the Cathedral. which seems to Mr. Street to afford the required space, without interference with the architectural effect of the exterior of the Cathedral. The greater part of the south side of the Cathedral will, if Mr. Street’s plans are carried out, be new work. The south side of the nave will be a repetition of the north side, and as there is no difficulty about seeing the north side, it is not very important if the new south elevation is not entirely open to view. lint there is no obtainable view of the choir, save that from the south and south-east, and it would therefore be a great mistake to shut the church out from view at all on this side, which would be the effect of any erection of buildings for the Synod on the south-east side of the Cathedral. It follows, therefore, that the proper site for the Synod Hall is on the western portion of the ground south of the Cathedral, belonging to the chapter. Here originally stood various buildings connected with the Cathedral. Here, therefore, Mr. Street proposes to place the Synod Hall and the buildings connected with it. The space will allow of its erection at right angles to the church, and leaving a small courtyard in the centre. ”