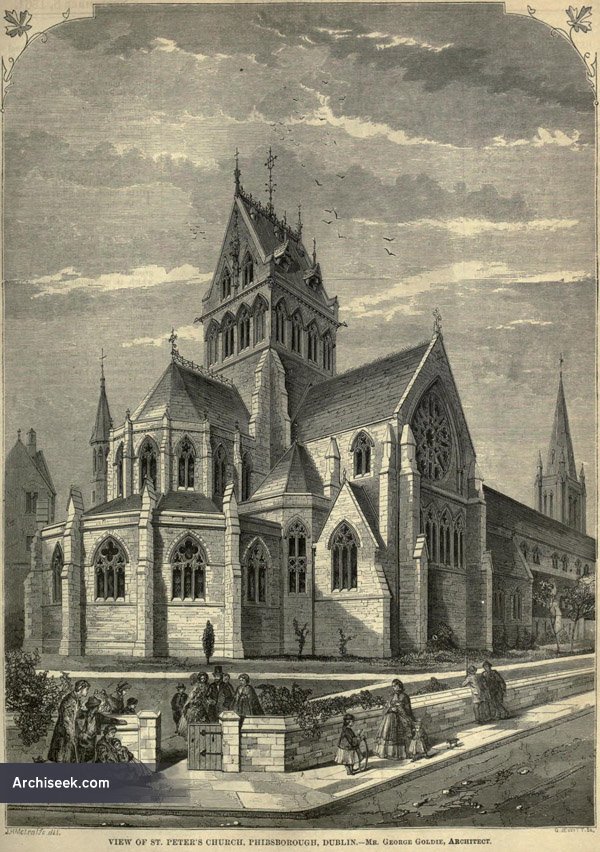 The chancel and transepts were erected, together with the great central tower to this design by George Goldie in the late 1860s. By 1871 the transepts, the chancel, and the tower were all finished. But the construction of the tower proved to be a controversial affair and resulted in a long and costly law-suit which began as a dispute between the architect and builder, over whether its foundations were strong enough to support the tower. On foot of a Court Order the tower had to be dismantled because the foundations were deemed insufficient to bear the weight. This would see work stop for almost three decades. The church was later completed by Ashlin & Coleman in 1902, who remodeled the nave and constructed the 200ft tower at the east end. 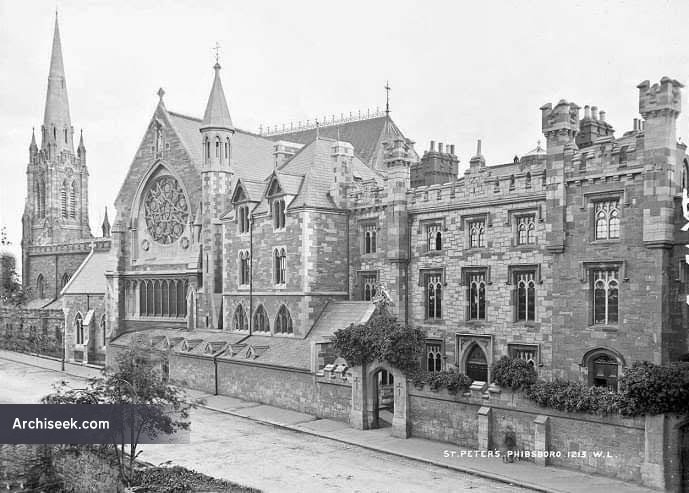 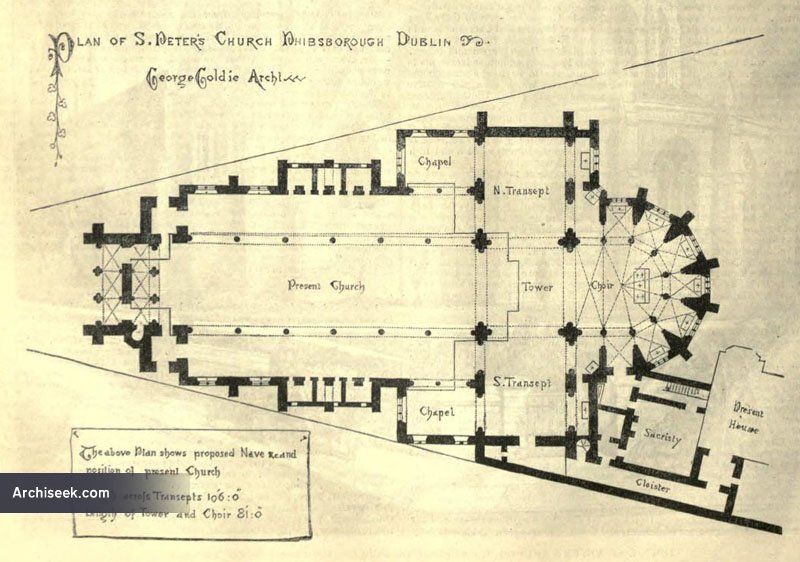 From The Building News, “The large mass of buildings, which we illustrated last week at page 731, have been gradually rising beyond the present extent of the Catholic church at Phibsbro’, and when completed are to form an addition to it on such a scale as to double the accommodation. The plan which we gave on page 730 fully explains the arrangement which has been adopted by the architect, Mr. Goldie, of King-street, Westminster. The east wall of the present church will be removed and join into the new transepts, which are 108 feet across, and 29 feet wide. The choir is shorter than was wished, but buildings and gardens in the rear of it rendered more ample proportions impossible, its greatest depth from the choir arch to the east wall of the Lady chape! being 50 feet. A procession path or aisle passes round the choir, and gives access to the nine apsidal and radiating chapels, which are required by the large body of regular clergy attached to the church. The external walling is in square rubble work, with blue limestone dressings; internally, Glasgow freestone has been employed, with detached shafts of the local limestone. A triforium passage passes entirely round the new building on the line of the base of the clerestory windows. The roofs are to be all vaulted in wood. The central tower is of a large square on plan (29 feet), and will form a lantern, being open to the roof, with a corbelled gallery within. The wheel windows in the transept which, with the pierced arcades beneath them, differ in each transept, are 17 inches diameter. Adjoining the south transept is a spacious sacristy, with rooms for the clergy on two floors above. A bell and stair- case turret and cloister of communication form picturesque features on that side likewise. The walls are now nearly ready to receive the choir roof. The work is being ably carried out under Mr. Goldie, by Mr. Walter Doolin, of Westland-row, Dublin.”