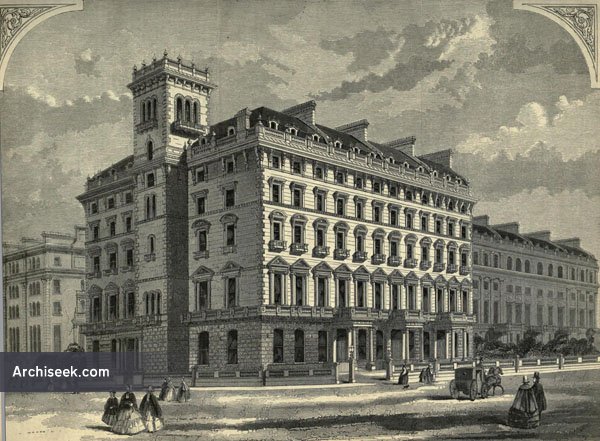 Published in The Building News, April 13, 1860. “ABOUT two years ago there stood a row of small inferior houses at the corner of Prince Albert-road and Gore-road, Kensington, fronting
towards the Park. Mr. William Jackson, the builder, having taken a building lease of the land thus occupied and an adjoining sitc,determined to pull down these inferior buildings and to erect four good houses, suitable to the site and locality, and to this end placed the matter in the hands of Mr. J. Tarring, the architect, the noble mansions now nearly completed being the result.

These buildings, which are in the Italian style, m.iy be fairly classed with the best specimens of domestic architecture around London, both in respect to their artistic treatment, and workmanship. No expense has been spared by Mr. Jackson to render them thoroughly sound and durable; and, while pains have been taken to render them pleasing to the eye, externally as well as internally ; care has been observed to prevent the introduction of ornament for mere ornament’s sake.

The whole of the works have been carried out under the supervision of the architect.

The practical foreman at the building is Mr. Thwaites, and the excellence of the workmanship throughout, testifies to the ability and attention he has exhibited in the discharge of his duties. There are six stories above the ground, also a basement story, which contains the kitchen and domestic offices. The space on the plan occupied by each house is about 90 feet by 30 feet. The height from the floor of the basement story to the ceiling of the top story is 85 feet 6 inches, and from the ground floor to the same ceiling 73 feet 6 inches.

The corner house, which is somewhat the largest, contains 35 rooms, besides entrance hall, staircase, gallery-lobbies, and water-closets. There are also ample vaults and cellars in the basement.

The tower is 104 feet high from the level of the footway to the top of parapet. The principal staircase is constructed in the tower and extends up to the fourth floor. The upper part of the tower is occupied by a lofty apartment, the windows of which command a fine view of London and its suburbs. “