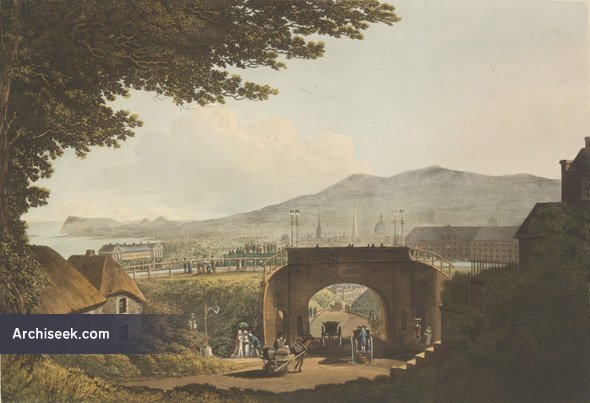 In 1789 Dublin Corporation commissioned the Royal Canal and a harbour built on Constitution Hill, connected to the main canal at Phibsboro by a spur. Though the branch line was completed by 1796, it was ten more years before the harbour was opened. The harbour’s location was chosen for its proximity to the markets and the law courts. By 1807 a regular passage boat service was operating to Mullingar. In subsequent years the area was a hive of industry, with many hotels and inns and the trade boats using the wharfage and stores at the harbour. The canal was linked eventually with the River Shannon in 1817, after many financial difficulties, and the majority of the main route still exists. In 1810 a reservoir, the Blessington Basin, was dug from the spur to supply water to the locality.

In 1877 MGWR, who now owned the Royal Canal were given permission by the government to close 150 yards of the branch line and to fill in the harbour, to construct a new forecourt for Broadstone Station. A new approach road, Western Way, was built by way of Foster Aqueduct. The harbour was no longer needed due to the construction of one larger and better situated at Spencer Dock, and was filled in to become the forecourt of Broadstone Station.