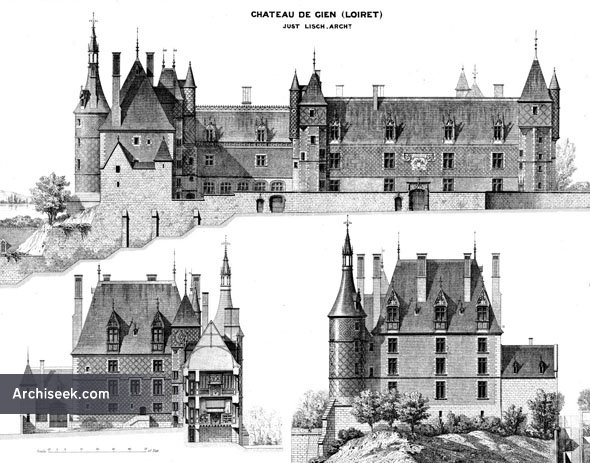 Originally constructed at the end of the 14th century, the only remaining vestige of that era is the square tower on the south facade, the Tour “Charlemagne”. The Chateau was remodeled at the end of the 15th century for Anne de Beaujeu , Countess of Gien and eldest daughter of Louis XI. The chateau has belonged to the General Council of Loiret since 1823, and was classified an historic monument in 1840. Along with chateaux of Amboise and Blois, the Chateau de Gien is one of the chateaux of the Loire Valley to have been built before the arrival of Italianate influences and thus constituting an example of Pre-Renaissance purely French architecture. The external decorations are of geometric patterns in polychromatic brick. Illustration is by French architect Jean Juste Gustave Lisch (1828-1910).