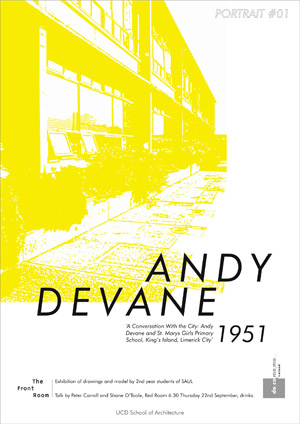 DoCoMoMo Ireland is collaborating with the 2nd Year students of SAUL http://www.ul.ie/architecture/ to mark the 60th anniversary of the completion of Andy Devane’s first major work of architecture and to clelebrate the Centenary of his alma mater, the UCD School of Architecture http://www.ucdarchitecture.ie.

Portrait 01 is the first of a centennial series of exhibitions at UCD that will put the spotlight on some of the School’s leading graduates. Andy Devane was born in Limerick in 1917 and died in Calcutta in 2000. He graduated in 1941 and joined the established practice of Robinson & Keefe during the war years. Famously, he was an apprentice under Frank Lloyd Wright at Taliesin between 1946 and 1948. After his return to Ireland and the formation of the new partnership, Robinson Keefe Devane, he went on to design numerous distinguished buildings, including the Vocational School at Inchicore, the church at Dublin Airport, Gonzaga College, Mount Carmel Hospital, the Irish Pavilion at the 1967 New World Fair, St Patrick’s Teacher Training College in Drumcondra, St Fintain’s Church in Sutton, the Irish Life Centre in Abbey Street, the AIB Headquarters in Ballsbridge and Journey’s End Lodge, his home at Bailey, among many other hospitals, schools, churches and office buildings.

This exhibition opening and talk, A Conversation with the City: Andy Devane and St Mary’s Girls’ Primary School, King’s Island, Limerick, which takes place at UCD Richview on Thursday 22nd September at 6:30pm, will focus on his earliest major work, built in his native city. The speakers include Peter Carroll and Shane O’Toole.

The exhibition will remain on view in The Front Room at UCD Richview for 4 weeks.