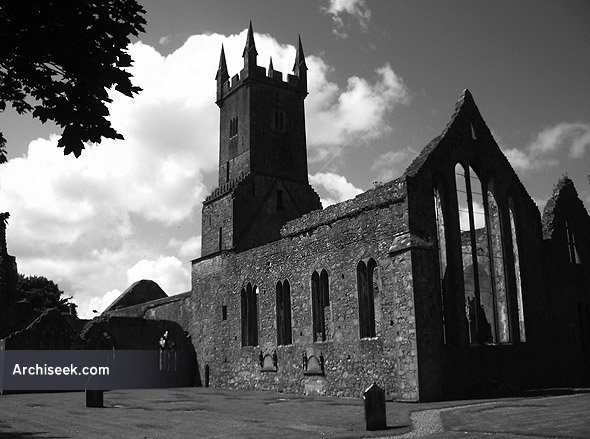 Conservation work by the OPW on historic Ennis Friary has been described as “the mutilation of one of the country’s most important national monuments”. Author of acclaimed history of the Famine in Clare, Sable Wings over the Land, historian Dr Ciarán Ó Murchadha hit out at the OPW works, describing the so-called secretive restoration as “the Disneyfication of the old friary ruin in Ennis”.

Works were due to be completed on the €100,000 project in 2010. However, they are still continuing and the scheme is expected to be completed this year. OPW-employed staff are putting a modern roof on the 18th century Protestant church built within the walls of the medieval nave to provide cover for the significant collection of medieval carved stone features within the remains of the friary.

The rich collection of carved stone includes the Creagh Tomb, Ecce Homo and Royal Tomb Canopy and also has remains of wall paintings. According to a spokeswoman for the OPW, the works followed the preparation and presentation of a conservation plan for the national monument.

She said: “The design of the modern roof reflects the original profile of this church and the consultant engineer confirms that its lightweight structure will have a minimal impact on the original walls. “The design does not attempt to ‘restore’ or interfere with the medieval elements of the friary.”