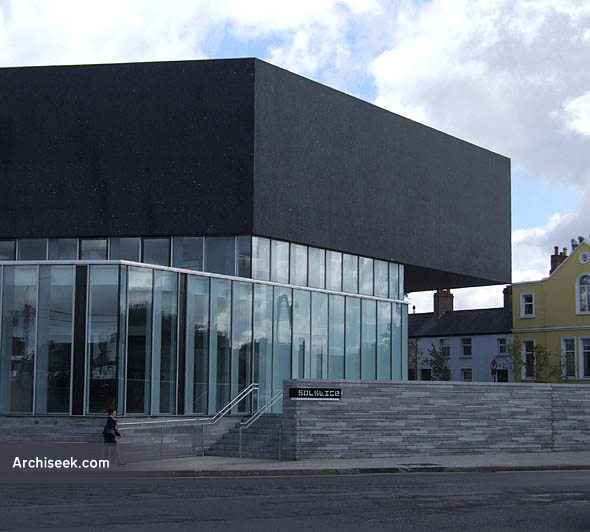 From 20 May until 5 July, M – Museum in Leuven will once again play host to the non-profit organisation Stad en Architectuur (City and Architecture), which is organising an exhibition on recent architecture from Ireland. Stad en Architectuur has combed the archives of the Architectural Association of Ireland (AAI) in Dublin, which presents an annual national architectural award, and has selected forty projects that give a representative picture of the exciting Irish architectural scene in the past ten years. These will be placed in a thematic context to explain the background to this development and articulate the social and spatial challenges of an island undergoing great change.

The official opening will take place on Thursday 19th May at 8.30pm, following the keynote lecture by Irish critic Shane O’Toole. The exhibition will close in Leuven on 5th July and is expected to travel to other venues later in the year.

Now that Ireland, hit by the global crisis, is faced with the prospect of economic, political and social reform, the question arises as to what the benchmarks for this challenge are. The field of architecture is also under scrutiny. What lessons can be learned from the Irish architectural output of the past decade? What projects can serve as examples for tackling social issues? What spatial choices and architectural concepts will gain significance in the quest to rebuild this island?

The answers to these questions are sought from a young generation of Irish designers who have taken a fresh, new look at architecture and are making exciting things happen, their work subtly blending into traditional Irish building culture. They use a simple yet idiosyncratic architectural language, with the emphasis on materiality, spatiality and social context.

Stad en Architectuur has therefore decided to put the spotlight on Irish architecture. Together with the non-profit architectural association Archipel, we are planning a range of activities on the subject of contemporary Irish architecture, including this exhibition. To bring into focus the social and spatial challenges and solutions, the forty projects selected will be arranged according to theme. ‘Collective housing’, ‘the university in the city’ and ‘government buildings’ are just a few examples of what’s on offer. These different themes reveal that, in addition to all the apparent differences, Irish architectural practice displays striking similarities with the Belgian experience in terms of scale and problems.

8 sub-themes are proposed, each represented by 5 projects, as follows:

I. The Face of Democracy

VI. A Place for Culture

VII. The University in the City