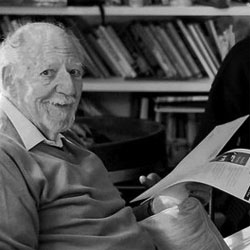 Belfast-born architectural historian, writer and poet Maurice Craig has died at the age of 91. Known as Ireland’s first conservation writer, Craig had been at the forefront of the movement to save Ireland’s historic buildings from demolition since the 1940s. The author of many books, his best known work Dublin 1660-1860 The Shaping of A City, charted the evolution of Dublin was first published in 1952 to academic acclaim. However, it was not until the book was re-issued in 1969 during the height of the campaign to save Georgian Dublin from demolition that Craig came to wider public notice. It has since been republished a few years ago.

His concerns about the deterioration and neglect of Georgian Dublin were clear in Dublin 1660-1860, in which he wrote: “To walk up Henrietta Street today is a striking and saddening experience. Though it contains only some 16 houses, they are of so palatial a cast that one easily understands how it remained the most fashionable single street in Dublin until the Union, long after many rival centres of social attraction had been created.”