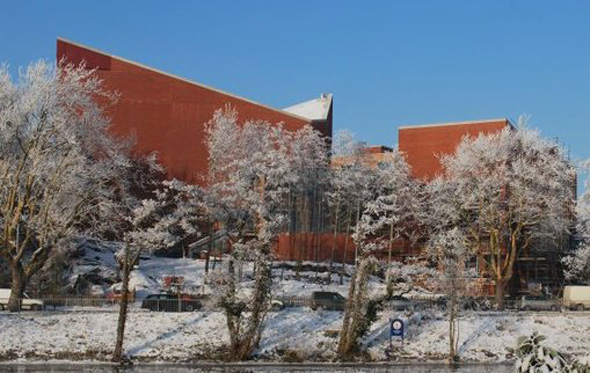 Belfast’s imposing Lagan river-fronted, reinstated Lyric Theatre was officially opened last night with playwright Brian Friel offering what he called “secular prayers” that it would become a “warm house, a welcoming house” and a “sacred place”. Minutes before the new theatre kicked into life with a production of Arthur Miller’s The Crucible, Friel said he hoped the new Lyric would find voice “where the spiritual has gone silent or is neglected” and that it would be “impatient” of all that was conventional or fashionable.

Setting the Lyric on its new adventure, he said: “This must become a laboratory for scrutinising untried thoughts and practices. I pray that this house never forgets that it is a playhouse, a house of play, and that laughter and merry-making and wit and comedy and raucous fun and ordinary giddiness and silly giggling may be accommodated here and indeed encouraged because a solemn theatre is a dead theatre.” He prayed that Belfast would “reap the rewards” of sustaining such a theatre, finally offering a “heartfelt prayer for all the creative people who will work here in the coming decades”.

Friel added: “I pray that they find their reward in putting us in touch again with our deepest souls, of lifting us up again to those neglected values that we need to embrace if we are to be fully human. I solemnly pray that they will indeed find great, great reward in that unique venture. Amen.”
Belfast was so proud of the new theatre, which replaced the old Lyric built on the same site in 1971, that it had two openings at the weekend, the “official” black-tie gala opening last night, and an event on Saturday – with more celebrations to come.