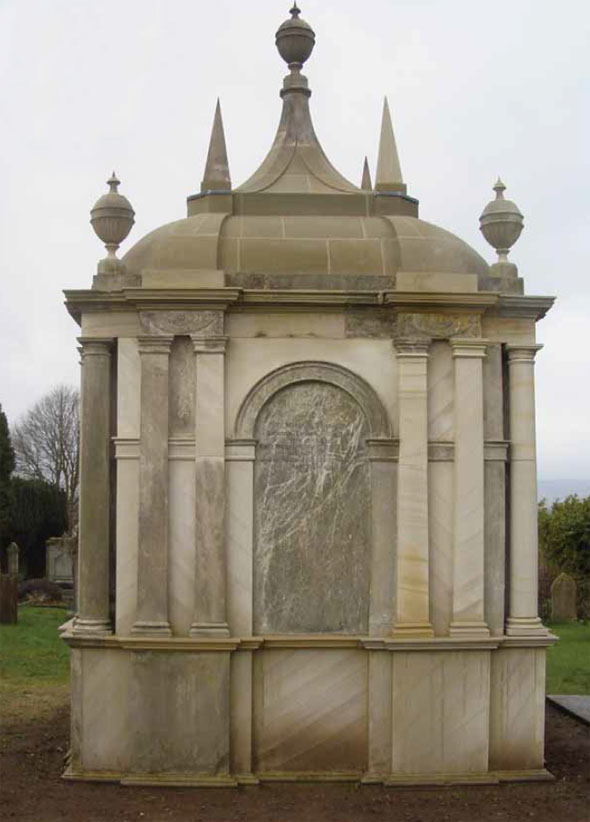 The Follies Trust, in association with Dublin City Council, is delighted to announce details of a forthcoming lecture by James Simpson, Simpson & Brown Architects, Edinburgh entitled: Conservation Follies – Attempting the Impossible This lecture is organised to mark the conclusion of the project to restore the third mausoleum in Knockbreda churchyard, Belfast, by the Follies Trust. James Simpson will speak on the following conservation projects: The Scottish Cemetery in Calcutta; Botanic Cottage, Edinburgh; and Robert Adam’s Mavisbank House, near Edinburgh, which was featured in the BBC2 series Restoration 2003.

Booking a seat at the lecture is not required however, places are strictly limited to 150. Lecture will be held on 21st April at 1pm at the Wood Quay Venue, Civic Offices, Wood Quay, Dublin 8.

James Simpson of Simpson & Brown Architects, Edinburgh, is working on a project to conserve mausolea and tombs in the Scottish cemetery, Calcutta. The inspiration for the three mausolea in Knockbreda is believed to originate from European cemeteries in Surat or Calcutta. James will speak on three projects: The Scottish Cemetery in Calcutta, Botanic Cottage, Edinburgh, and Mavisbank, near Edinburgh, which was featured in Restoration 2 3. James trained at Edinburgh College of Art with the late Ian Lindsay and in Norwich with Sir Bernard Feilden, for whom he worked on St. Paul’s and Norwich Cathedrals. Since joining with Stewart Brown in 1977, he has been architect to St. Giles’ Cathedral and responsible for the work on a number of great churches, including York Minster, the City Churches in Dundee and the Magdalen Chapel, Edinburgh; institutional buildings in Edinburgh including the General Register House, the Advocates Library, the Royal College of Physicians, and the new headquarters for the National Trust for Scotland; country houses including Yester, Arniston, Rosslyn Castle, Hawthornden, The Hirsel, Kinlochmoidart, Tyninghame, Torsonce and Auchinleck.

The Follies Trust is a charity and a company limited by guarantee. The Follies Trust has seven directors and 10 friends who, in a voluntary capacity, guide and direct the trust. The Trust’s first project was to restore three grade B+ listed mausolea in Knockbreda churchyard, Belfast. Architectural historian James Stevens Curl describes them as ‘the oddest and finest of buildings in the genre in Ulster, [which]…cannot be surpassed architecturally…’ www.folliestrust.org/projects. The Follies Trust is working on or has completed four more projects around Ireland and is seeking suggestions for future schemes.