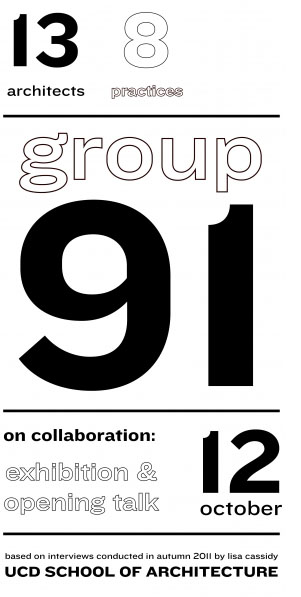 This modest exhibition takes the question of how these individuals and practices collaborated – how they handled the challenges of working in a large group on a project that underwent many changes – and presents Group 91’s own exhibition panels (shown at the Architecture League of New York in 1998) interwoven with written excerpts from interviews conducted by Lisa Cassidy in 2011 with Yvonne Farrell, Shelley McNamara, Michael McGarry, Siobhan Ní Eanaigh, Sheila O’Donnell, Shane O’Toole, John Tuomey and Derek Tynan.

The opening event at 6.30pm on Wednesday 12th October 2011 in the Red Room at Richview (UCD School of Architecture) will feature a discussion moderated by Prof. Hugh Campbell between McGarry Ní Eanaigh Architects, Sheila O’Donnell, John Tuomey, Derek Tynan, Shane O’Toole, and Grafton Architects (project architects Ger Carty and Philippe O’Sullivan). In the course of the discussion, this question of collaboration will be explored further – how did the experience of Group 91 prepare the practices for other, future collaborations, and what can architects and students learn from this?

The exhibition will be open in the Front Room Gallery (Richview) until 26th October.