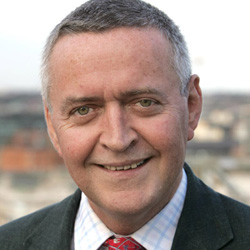 It was recently announced that Frank McDonald, the Environment Editor of The Irish Times; and Sandra O’Connell, writer and curator of Open House Dublin; are to receive RIBA Honorary Fellowships in February 2012. RIBA Honorary Fellowships are awarded annually to people who have made a particular contribution to architecture – in the broadest sense. This includes its promotion, administration and outreach; and its role in building more sustainable communities and in the education of future generations.

RIBA President Angela Brady said, while making the announcement, that ‘Each of this year’s Honorary Fellows has made an enormous contribution to architecture, whether as a practitioner, designer, curator, writer or policy maker. The RIBA values everything that they have brought – in their very different ways – to the knowledge, understanding and appreciation of the world of architecture. I look forward to presenting them with their Honorary Fellowships in February.’

The 2012 RIBA Honorary Fellowships will be presented at a ceremony at the RIBA in London on 09 February 2012. This year’s RIBA Honours Committee was chaired by RIBA President Angela Brady and included architects David Adjaye, Yvonne Farrell, Niall McLaughlin, Sarah Wigglesworth, and Sir Terence Conran.