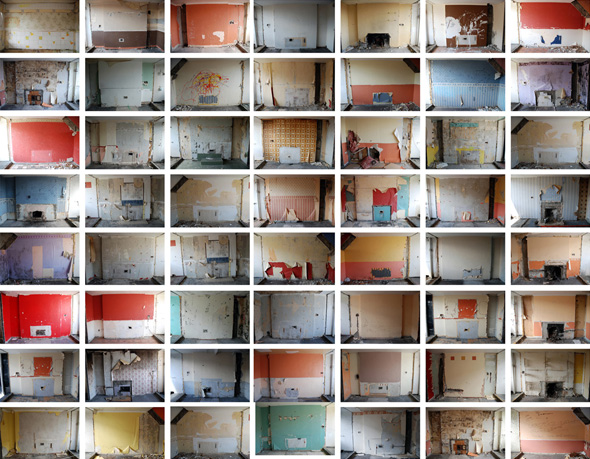 The provision of social housing is always politically charged, and the architecture of social housing can be inseparable from that politics. The buildings cease to be seen as buildings and are only viewed through the prism of the perceived successes or, perhaps more often, failures of individual schemes. And yet, the architecture deserves to be examined in its own right. The photographs of Dutch photographer Willem Heeffer do just this.

Born in Hilvarenbeek in 1980, Heeffer studied at the Eindhoven Design Academy where he worked with the architect Wim Cuyvers, and graduated from the Department of Public Space in 2004. He moved to Ireland in October 2005 and now lives between Dublin and Helsinki working on design and photography projects.

Clear and detached, these photographs record a number of Dublin social housing schemes built between the late 1950s and the early 1970s. All were photographed as they were being, or just after they had been, cleared of tenants in preparation for their impending demolition.

In the exhibition catalogue, art historian William Laffan notes that ‘Heeffer photographs the Dublin flats in a format that traditionally has been accorded only to more elevated architectural typologies. His rigorously symmetrical presentation and low vantage point combine to give the block at O’Devaney Gardens – despite its dilapidated condition – the aappearance of a twelve-bay mansion, and the building almost stands on its dignity and insists on its equality… Despite his seemingly dispassionate, unmediated approach, Heeffer extracts a similar beauty from the desolate remains of Dublin flats as others have from more promising material’.

Heeffer’s camera looks beyond the common-place perceptions of the subjects as hubs of disappointment and discontent. The buildings emerge from layers and years of preconceptions and prejudice to be examined on their architectural merits. What, if any, those merits are is a judgement the individual viewer will ultimately make.

To accompany the exhibition, the following lecture series has been arranged:

What I have learned so far in Ballymun

From the Edges: Housing + Neighbourhood Renewal

All lectures are free and open to the public and take place in the Irish Architectural Archive, 45 Merrion Square, Dublin. For booking and further information please contact the Archive at 01 6633040 or slincoln@iarc.ie