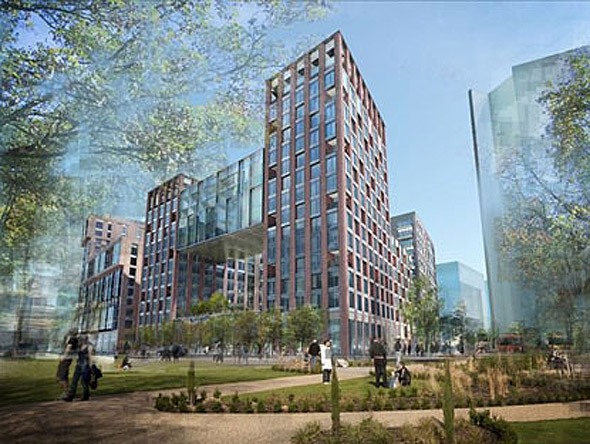 Irish property company Ballymore has submitted a planning application for major mixed-use scheme around the proposed new US embassy complex in London. The company is planning to develop more than 2,000 homes, 500,000 sq ft of offices, a 100-bed hotel and 130,000 sq ft of shops and restaurants as a part of the “Embassy Gardens” project.

The masterplan for the 15-acre site, in the Vauxhall, Nine Elms and Battersea Opportunity Area, consists of nine building plots with buildings rising to up to 23 storeys. It will be developed next to the US Embassy site – five acres of land sold to the US government by Ballymore in December 2009.

Ballymore predicts gaining planning permission in the autumn and intends to start marketing the scheme next year. Ballymore sold the land for the US embassy building in December 2009. The embassy is expected to open in 2016 after leaving its current home in Grosvenor Square, with an estimated 1,800 people working at and visiting the embassy each day.

The project needed to stick to strict anti-terrorism criteria laid down by the US government. The Mayor’s design adviser, Sir Terry Farrell, is overseeing the project and today said he hoped the scheme would rival the Thameside regeneration of east London. Architecture practices Allford Hall Monaghan Morris, Fielden Clegg Bradley and FLACQ designed the buildings. According to Farrell: “The aim is to turn it to one’s benefit by making a defensive area around the embassy take the form of landscape. It means everyone can look at landscape instead of looking at it like fortifications like at Grosvenor Square.”