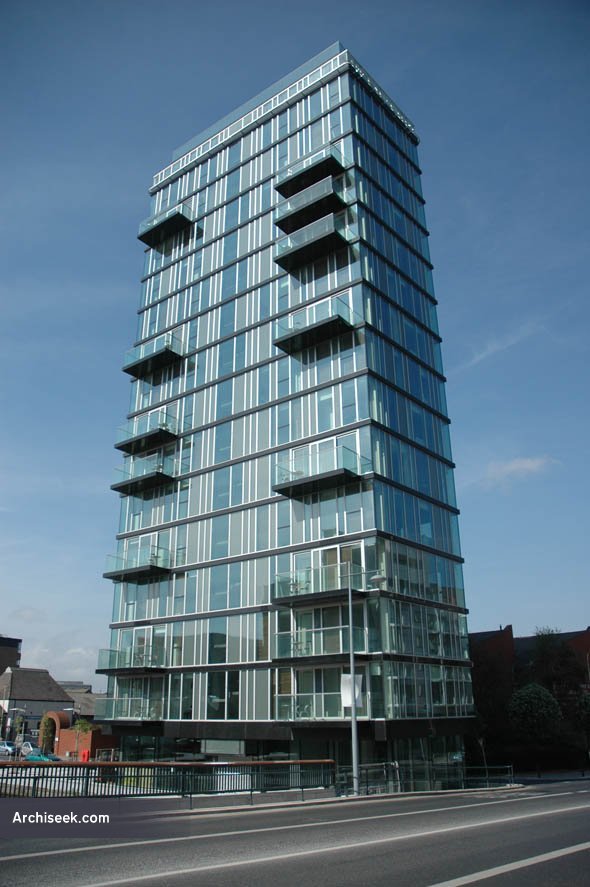 The Alto Vetro building, at Dublin’s Grand Canal Quay, by Shay Cleary Architects has been awarded the Royal Institute of the Architects of Ireland (RIAI) Housing Medal, the Institute’s premier award for housing. The Minister for the Environment, Community and Local Government, Phil Hogan TD, presented Shay Cleary Architects with the award at a ceremony in Dublin Castle this lunchtime during the National Housing Conference. The Housing Medal is awarded to an architect or architectural practice for a project of exceptional merit completed within 2007/2008.

Mr Keogh, explained that Alto Vetro is a 16 storey glazed tower comprising of 24 two-bedroom and two three-bedroom privately-let apartments, as well as two pavillions and two retail units. “Alto Vetro is located at one of Dublin’s landmark locations – the Grand Canal Basin – which is now an important junction between a busy car-corridor and a growing pedestrian route. The building rightly makes a strong architectural statement while also providing high quality apartments, indeed, its slim elegance is a significant new urban marker and it is ‘pitch-perfect’ in its relation of form to site.”

Mr Keogh also commented on the two ‘highly commended’ schemes Memorial Court, Kilmainham, Dublin 8 and York Street, Dublin 2. “The York Street scheme consists of 66 units providing homes for families and individuals as well as all the facilities they need – like a children’s play area, shared garden, community centre and recycling facilities – all within a very short distance of Grafton Street and St Stephen’s Green. Memorial Court is comprised of 66 apartments that provide for the requirements of older people within one of Dublin’s more settled and traditional communities.”