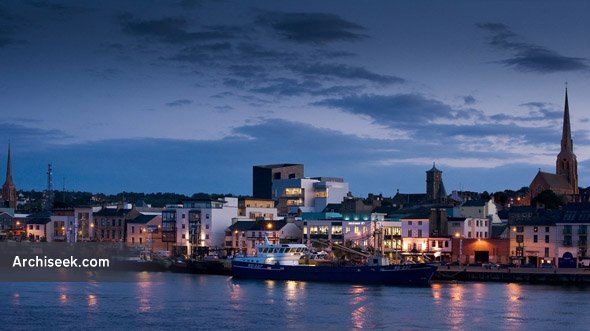 The new 7,235sqm purpose-designed opera house contains two theatres the principal auditorium 780 seats, and an adaptable auditorium of 175 seats provides for performance in a variety of formats. The complex problem for the architectural team was how best to insert a very large and highly complex spatial programme into a steeply sloping backland site barely large enough to accommodate it. The orientation of the main elements of stage and auditorium was self-determining in that large scale vehicular access could only be achieved from one point within Wexford’s dense Medieval street pattern, thereby fixing the stage position, get-in, and hence the auditorium location

In architectural terms, the new opera house may be seen as a series of formal set-pieces centred around the main auditorium, fly-tower and the smaller second theatre forming a nucleus at the heart of the organisation. The nucleus was then enveloped by an architectural collar containing the supporting spaces which locks it into the irregular edges of the backland plots of urban block in which it is situated.

The O’Reilly Theatre, (the main auditorium), has been inspired both by the form of a cello and the curves of a traditional horseshoe-form operatic space. Its surfaces are lined in black American walnut whilst the seating has been finished in pale purple leather giving the room a rich sense of material quality. The curvaceous qualities of the room and its balconies, and its unbroken timber materiality are intended to be analogous to a stringed instrument, perhaps the cello. The technical elements of the theatre such as the lighting bridges are floated free and set against the timber lined ceiling, comparable aesthetically to the cello’s technical elements, its finger board, bridge and strings. The walnut covering every surface is imbues the room with a sense of consistency and rigour, resulting in a space of great visual weight.

Close up, the new complex has retained the extraordinary element of surprise and secrecy so characteristic of the old Theatre Royal, by re-integrating itself into the historic fabric of Wexford’s medieval centre, behind reinstated terraced buildings.

The scale of the building and its contribution to Wexford’s silhouette only becomes truly apparent when the project is viewed from the banks of the River Slaney. From there the new flytower, auditorium and the upper parts of the building, appear as a captured pavilion in the skyline alongside the spires of Wexford’s two Pugin inspired churches and the Italianate tower of the Franciscan Friary, announcing the presence of an exceptional new cultural building in the historic townscape.