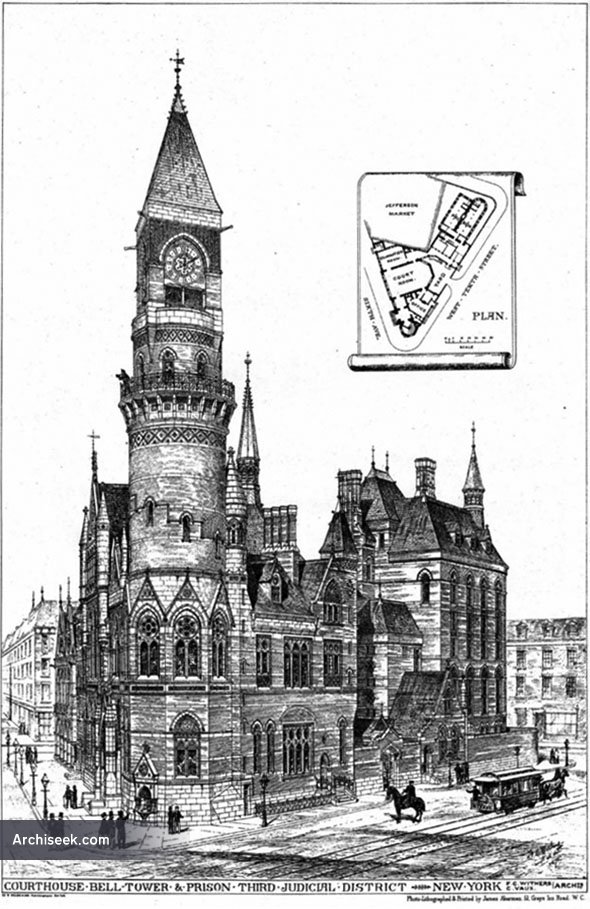 Originally built as the Third Judicial District Courthouse between the years 1874-1877 fto a design by architects Frederick Clarke Withers and Calvert Vaux. Its polychrome materials— red brick, black stone, white granite, variegated roof slates are typical of the “Ruskinian gothic” of Calvert Vaux’s first ranges for the American Museum of Natural History and the Metropolitan Museum of Art. In the 1880s a panel of American architects voted the complex the fourth most beautiful buildings in America. The eclectic ensemble was inspired by Venetian Gothic details and featured stained glass windows and a four-sided clock tower. The carefully massed picturesque group included an adjacent jail, but only the former Courthouse now remains

The Jefferson Market Courthouse ceased to be used as a courthouse in 1945. The building remained vacant and was slated for demolition, but local residents saved the richly decorated brick structure by persuading the city to reuse the building as a public library. The interior was redesigned by Giorgio Cavaglieri: the police court became the Children’s Reading Room, the Civil Court the Adult Reading Room.

The building was listed on the National Register of Historic Places in 1972 and was declared a National Historic Landmark in 1977, both under its name as “Third Judicial District Courthouse”. Illustration published in The Building News, July 9th 1875.