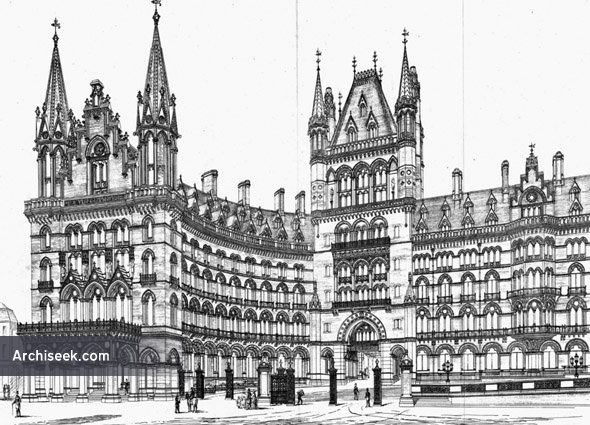 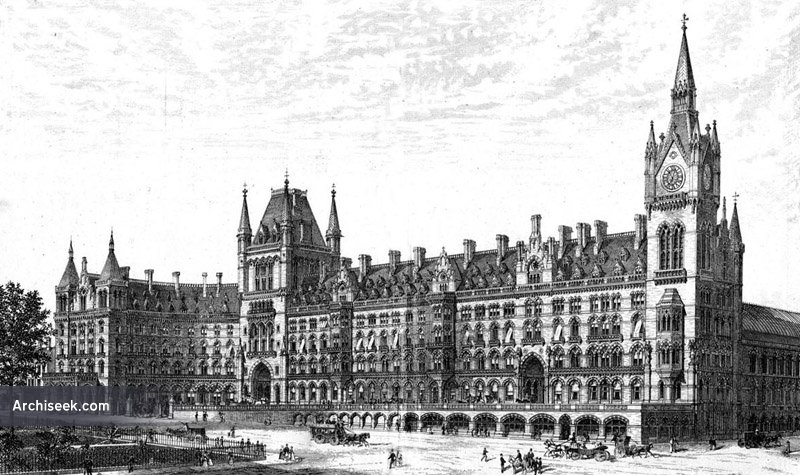 In May 1865, while the adjacent station was still being constructed, the Midland Railway Company launched a competition for the design of a 150 bed hotel, with eleven architects asked to submit their entries. One of the architects, Sir George Gilbert Scott (1811-1878), submitted a grand plan bigger and far more expensive that the original specification. But his bare-faced audacity paid off and he was awarded the contract – although the Directors of the Midland Railway immediately demanded some hefty cost cutting measures which included knocking off two floors of office accommodation and one floor level from the hotel. Altogether, the hotel fabric cost £304,335, decoration and fittings £49,000 furnishings £84,000, adding up to £437,335.

The hotel managed to prosper until after the first world war, when it was taken over by the London, Midland and Scottish Railway in 1922, before closing in 1935 – its facilities were outdated and it had become too expensive to run and refurbish. Renamed St Pancras Chambers, the premises settled down to a somewhat less glamourous existence as railway office.

The building survived the bombing raids of the Second World War but found itself threatened with complete demolition in the 1960s, before it was saved from being swept away. Ir was then awarded Grade 1 listed status in recognition of its importance as an example of high Victorian Gothic architecture.

In the 1980s, the building failed its fire certificate and was closed down, remaining empty for many years. Although the interior of the building had suffered badly as offices, much of the original decoration, including stencilling, mosaics and ornamental ceilings, survived and has since been carefully restored. The St. Pancras Renaissance London Hotel occupies parts of the original Midland Grand Hotel, including the main public rooms, together with a new bedroom wing on the western side of the Barlow trainshed. The upper levels of the original building have been redeveloped as apartments by the Manhattan Loft Corporation. Illustration published in The Building News, May 22nd 1874.