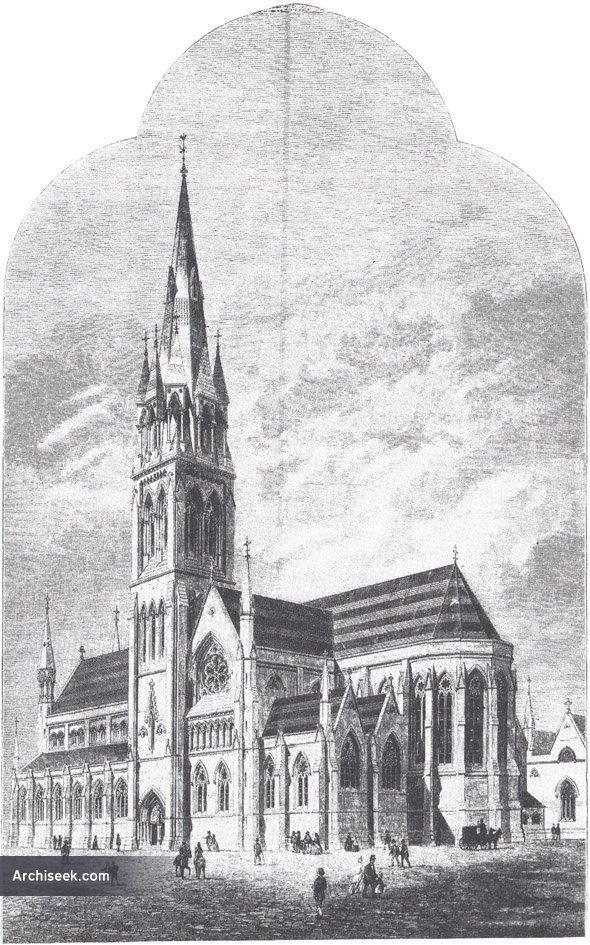 “According to the designs and plans which have been prepared by Mr. J.J. McCarthy, the eminent architect, and under whose superintendence they will be carried out, the new cathedral will consist of a nave, aisles, transepts, choir, with apsidal termination, and eastern chapel and sacristies. There will also be a chapter house which will be on the northern side. A tower and spire will be raised on the west flank of the south transept to a height of 210 feet. The entire length of the cathedral will be 177 feet. The nave and aisles will be 72 feet wide and the total width across the transepts will be 110 feet. The style of architecture will be Gothic of the 14th century.” From a description of the laying of the foundation stone in The Freeman’s Journal, June 19 1861.

And bizarrely two years later, The Irish Builder seems a little late with the news that: “We understand that there have been 150 applications for instructions to competitors relative to the proposed new cathedral at Monaghan, many from English and Scotch architects”

Design for St. Macartan’s Cathedral, Monaghan, which was under construction at this time, and completed, after McCarthy’s death, in 1992. Illustration from the original publication in the journal The Builder, 12 September 1868. The nave of the completed building was two bays shorter than illustrated.

“Monaghan Roman Catholic Cathedral, by J.J. McCarthy, RHA, is familiar to the visitors of the Royal Hibernian Academy of last year. It may be remembered as distinguished from other architectural drawings by Mr. Hayes’ clever coloring and the elaboration of it as a picture in a manner little practised on architectural circles. As a design it is undoubtedly fine composition. The great tower and spire adjoining the south transepts – an important feature in which Mr. McCarthy is generally happily graceful – in this case peculiarly so. The leading lines of the structure are carried up simply and grandly by almost unbroken buttresses from the base to the corbel table, and a bold verticality of treatment is the leading characteristic throughout. The way in which the sire rises from the cluster of eight airy lucarnes at its broaches is very successful.” The Irish Bulder, June 15 1865.