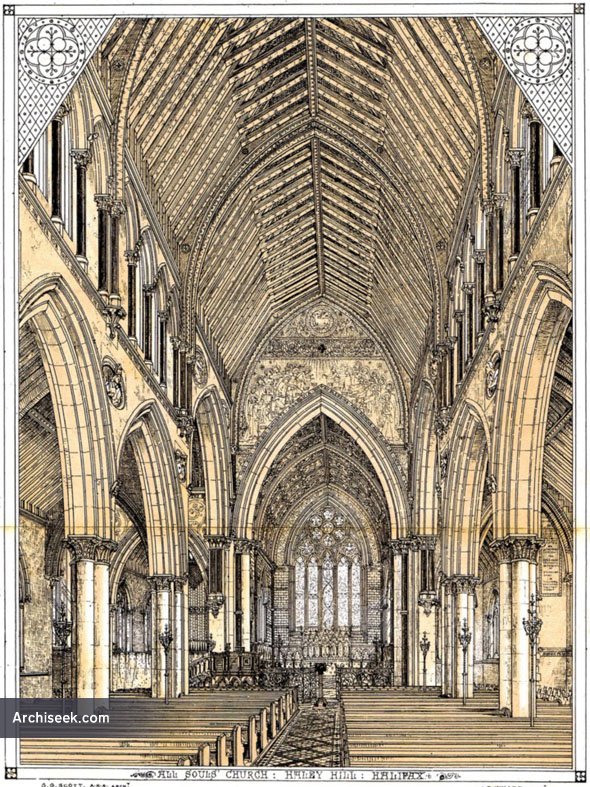 All Souls was commissioned and paid for by the local industrialist Edward Akroyd in 1856, and was intended to be the centrepiece of the model village of Akroydon. Akroyd appointed Sir George Gilbert Scott as architect, and the church was completed in 1859. Scott considered it to be his finest church. Scott also designed Akroyd’s own house and garden, the vicarage and houses for his employees.

The tower has four stages, on the top of which is a parapet containing arches, and an octagonal, crocketted pinnacle at each corner. In the upper stage of the tower are double two-light bell openings. The staircase is contained in the wall and the buttress at the northeast corner of the tower. The spire is divided into five stages by moulded bands; in three of the stages are gabled windows. On its summit is a finial and a weathervane. At the west end of the church is a deeply recessed doorway, over which is a tympanum containing sculpture. The south porch contains an arcade of three arches, each containing a single-light trefoil-headed window, and deeply recessed doorways. On the north face of the north transept is a priest’s door. The clerestory has 15 windows on each side.

Internally, between the nave and aisles are arcades with columns made from Derbyshire marble. The piers of the tower and transept arches are made from Aberdeen granite. The church is floored with Minton black, red and chocolate encaustic tiles. The three steps leading from the nave to the chancel are in Nottinghamshire red sandstone. The arcades between the chancel and the chapels are carried on columns of Italian marble. In the chancel is a sedilia, and a credence table built into its wall of the chancel. Between the nave and the chancel is an alabaster plinth carrying an screen in wrought iron. The screen was made by Francis Skidmore.

The reredos is in alabaster and contains niches with statues of the Virgin Mary, Mary Magdalene, Mary of Bethany, Saint John, Nicodemus and Joseph of Arimathea. The octagonal pulpit is in Caen stone on a pedestal of Derbyshire marble. The font is square and has a circular bowl. It is made in serpentine from The Lizard and is carried on a pedestal of Aberdeen granite. All the windows contain stained glass. Some of the windows were designed and made by Hardman & Co., and others are by William Wailes, and Clayton and Bell.

After the church was declared redundant, the entrance doorway in the south porch was boarded up to prevent vandalism. This was considered to be unsightly, and the Churches Conservation Trust commissioned the design and construction of a set of gates. These are made in iron and have been painted in reddish-brown to complement Scott’s design, and the cross and floral motifs have been gilded. At the same time some conservation work was carried out to the surrounding stonework in the porch, and also around the west window. In 2007–08 the Trust carried out more extensive repairs to the church, including some re-roofing to make it weatherproof, and repairs to the stained glass windows and tracery.