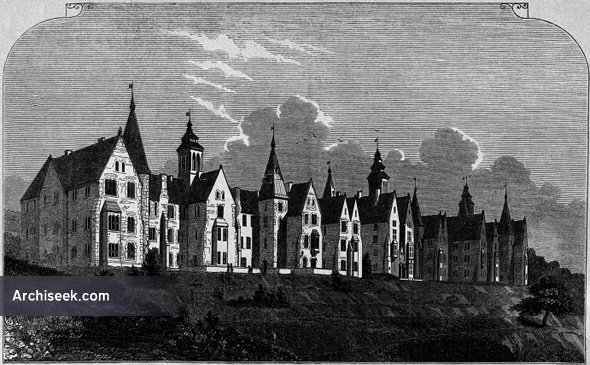 Originally designed as three separate ranges spectactularly sited overlooking the river Lee. Constructed between 1847 and 1852, the ranges were linked by low arcades which also linked a chapel and refectory hall set behind the main buildings. These were arranged so that the gable of the hall and spire of the chapel were visible from the front. The whole ensemble had six staircase towers and numerous gables. In 1861 Atkins was forced to link the main blocks to provide more accommodation – but giving the building an almost unending facade in the process.

It was named after the Earl of Eglington, the Lord Lieutenant of Ireland ans accordingly opened as the Eglinton Lunatic Asylum in 1852. A chapel was added in November 1885. An annex, which subsequently became known as St. Kevin’s Hospital, was built to the east of the main structure in the late 1890s.

The main facility became the Cork District Mental Hospital in 1926 and Our Lady’s Psychiatric Hospital in 1952. It closed in 1992 and was subsequently converted for residential use as Atkin’s Hall.