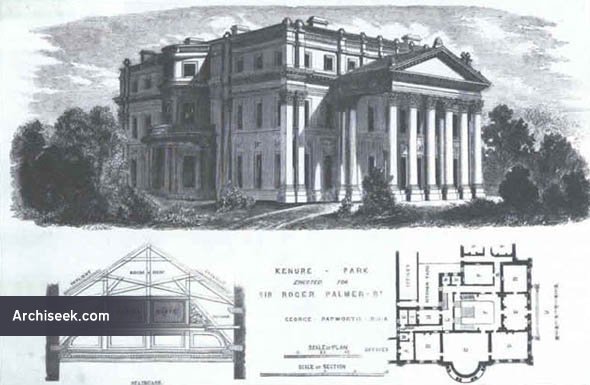 Rebuilt in 1827 on the site of an earlier house, destroyed by fire. In 1964 the contents of Kenure House were auctioned, and the estate, which was also known as Kenure Park, was sold to the Irish Land Commission. Colonel R. H. Fenwick-Palmer, the last of the Palmers to live in the house, had decided to abandon the losing battle against rising costs, dry rot and rising damp. Within a short while the house was handed over to Dublin County Council, who, unable to find a buyer for it, in its increasingly dilapidated and vandalised condition, were finally obliged to demolish it for safety reasons in 1978. During its final years, the house saw a flurry of filming activity when scenes for “Ten Little Indians” (1965), “The Face of Fu Manchu” (1965), and “Rocket to the Moon” (1967) were shot there. The only remains are the grand portico which adorned the front of the house. Drawing published in The Irish Builder.