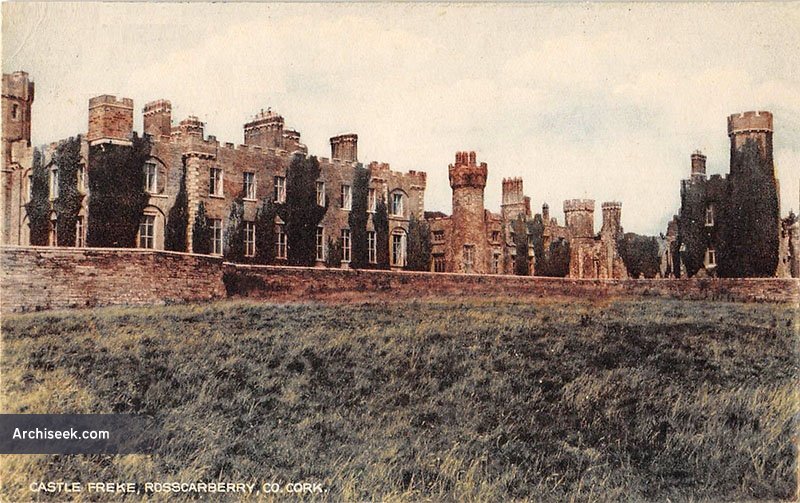 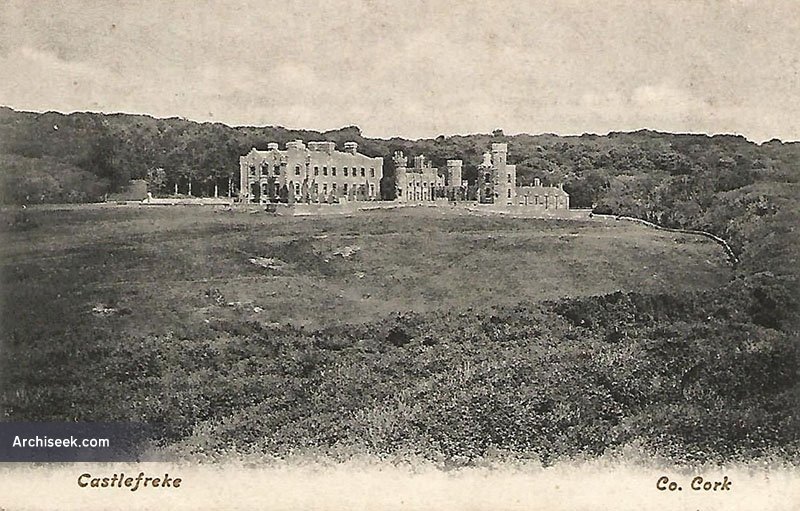 From; J.P. Neale, Views of the seats of Noblemen and Gentlemen in England, Wales, Scotland, and Ireland, vol.III, London, 1820
“When the present Proprietor came of age after a long minority, he found the old Castle in such a neglected and dilapidated state , that but a small part of it could be preserved. He therefore resolved on building an entire new structure ; the old site, though quite in cha racter for a castellated building, being situated on a bold rock , with a fine view of the ocean , yet being subject to some serious inconveniences, was relinquished, and a new one chosen in another part of the Park.

This building was designed and executed in that plain modern style so much used in Ireland about 30 years ago, in which inward convenience was almost the only object attended to. It contains a numerous and spacious Suite of Apartments, on the principal Story, consisting of a Drawing-room in the gallery style, of 50 feet by 20 feet; a Library and an Eating Room , each 34 feet by 22 feet; a Breakfast- room , and two other apartments ; with a magnificent Hall and Staircase, an excellent bed – chamber story of twelve Rooms, and -a basement Story, firmly vaulted . When the Offices were to be built, it occurred to the Proprietor that the whole might be thrown into the character of a Castle, as more appropriate to the situation and circumstances of the place ; his Lordship resorted to the skill and taste of Mr. Morrison, who coinciding in that view of the subject, furnished designs for the purpose, a considerable part of which have been put in execution in the Offices and a Suite of private Apartments for the Family ; these have been all built in the castellated style with hewn stone and admirable workmanship ; and when the whole is completed, it will present a rich specimen of castle architecture . Mr. Morrison has been particularly successful , in adapting the character of the Building to the situation . The Castle stands on a hill fronting the south, at which point it has a fine view of the sea , and the penin sula of the Galley Head ; while , to the westward, it commands a beautiful view of the coast, which is finely broken into bays and head lands, some of the latter rising to stupendous heights, and varied in all the rugged boldness of rock scenery. These two views of the ocean are happily separated by a large conical hill, which stands to the south west of the Castle, and relieves the eye from that long, uninterrupted stretch of sea-view, which presents no object for the sight to rest on but a boundless horizon. A more close inspection of these bold rocks and lofty cliffs offers a variety of interesting subjects to the artist and admirer of coast views : the rocks are most beautifully formed, and richly coloured with different lichens. On some of the bold promontories may be seen the rude remains of ancient Castles ; and some of the caves are of the grandest character.

The eastern side of the hill on which the Castle stands, is clothed from its base with thriving plantations; and when the view of the place first opens on the traveller, whose road from the eastward winds through a deep, narrow glen, the whole has a grand and imposing appearance, presenting an extensive range of woodlands and undulating ground , with the fine turretted structure rising above it.