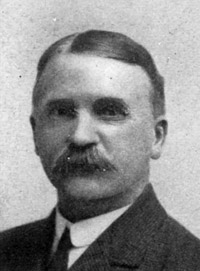 Born at Anketell Lodge, Stewartstown, Co. Tyrone, he was educated at the Academical Institute of Belfast, Ireland, later serving as a pupil under Charles Sherry of Belfast. He commenced a professional career at Middlesborough in 1874. He moved to Canada in 1876 and resided in Hamilton and Toronto until 1884, then returned to Ireland as resident engineer for the Londonderry and Ballymena waterworks systems until 1889. He then moved to Chicago and practiced his profession there for fifteen years, before moving back to Canada – but this time Winnipeg in 1905. He was a Fellow of the Royal Architect Institute of Canada, and a member of the Manitoba Association of Architects and the Royal Society of Arts of London. He enjoyed golf and fishing. He retired to Victoria, BC in 1911 where he died on 17 July 1916.