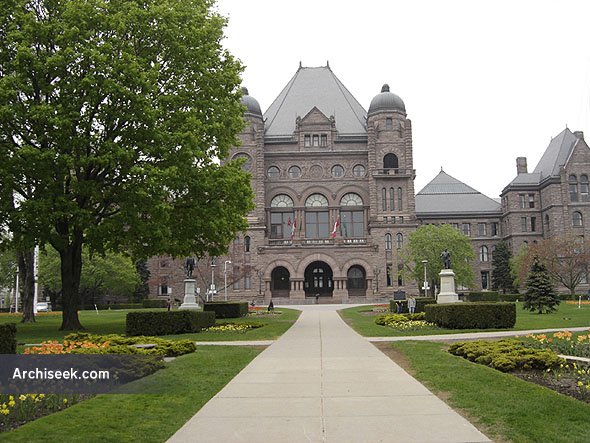 Concerns are being raised about a proposed condominium development that would see a pair of 48- and 44-storey towers poking up behind the provincial Legislative Building at Queen’s Park. Critics fear the development would ruin the view of the 117-year-old sandstone building, affectionately known as the “Pink Palace.”

Missing from the debate, however, is Aileen Carroll, Ontario’s minister of culture and heritage. Her spokesperson insists the issue is better left with the city, but that seems odd given Carroll’s responsibilities and the importance of this building as a historic landmark.

Others aren’t content to sit on the sidelines. Former lieutenant-governor Lincoln Alexander has sent a letter to Carroll calling for more action on her part.

Architectural preservation experts have also spoken up, arguing that towers planned for the site of the old Four Seasons Hotel (at Yorkville and Avenue Rd.) would spoil the Legislative Building’s impressive silhouette when viewed from University Ave. to the south. That’s also the conclusion of a heritage impact assessment commissioned by Toronto. And the city’s planning department has recommended against proceeding with the condo project.