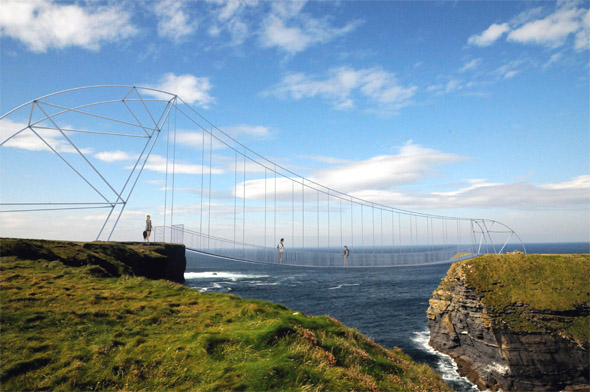 Plans have been unveiled for a €1.75 million cable suspension footbridge that would link the west Clare mainland to the historic Bishop’s Island. In a plan presented to the West Clare Economic Task Force, Kilkee architect Tom Byrne said that “there is nothing on the island of Ireland” to compare to the project.

“The only other attraction of this nature is the Carrick-a-Rede rope bridge on the Antrim coast in Northern Ireland. This bridge spans a 20m-wide chasm with a 23m drop to the sea below. “The Bishop’s Island cable suspension bridge would be a much more spectacular tourist attraction with a 117m-wide chasm and 50m drop.”

Senior member of Clare County Council Cllr PJ Kelly (FF) yesterday described the proposal “as a fantastic idea and already the tourism development promotion agencies are very much behind the project”. Mr Kelly added: “There is a greater shortage of good ideas than money around at the moment, but this a great idea and will provide a real boost to west Clare tourism.” Mayor of Clare Cllr Christy Curtin (Ind) said: “This is a very attractive project. It is very commendable and will add to the attraction of the Loop Head peninsula.”

Mr Byrne said that Bishop’s Island “has held a fascination with locals and visitors alike for centuries”.“It is shrouded in mystery – due mainly to its inaccessibility and remoteness but also to the fact that its inhabitants were ascetic monks who used its very remoteness for their chosen lifestyle.”