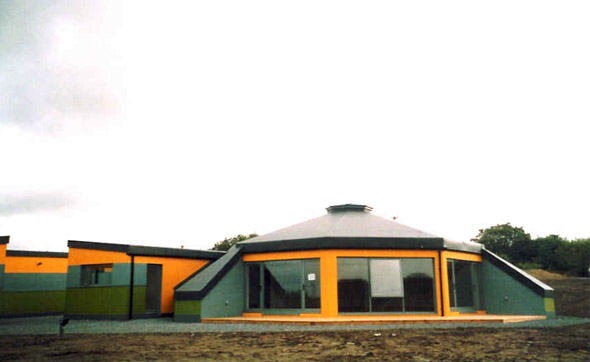 A barge floating through the country this month on the Grand Canal is heralding a new movement in architecture – Slow Architecture. This is based on the same principles of the Slow Food Movement – an alternative to the “slap “˜em up quick and flashy” school of building popular in the boom decade. The movement which is gathering pace in Ireland and abroad is “dedicated to simplicity, fitting buildings with nature and with people and the quest to produce buildings which evolve” says Sandra O’Connell, the editor of Architecture Ireland.

The Boghill Centre in Kilfenora is already ahead of the game here in Clare with its sustainable buildings project – a model of slow architecture involving a series of cob structures. The first Cob hut is well on its way to completion! This initiative is part of an exciting Eco project being carried out at the residential workshop centre. The Boghill MIST project focuses on sustainable and harmonious living, forging a deeper connection to the natural environment and includes sustainable building techniques and the creation of paths and recreational areas. As well as the Cob building the other project activities which are currently underway are a Reed Labyrinth and a Nature Trail.

The first Cob structure was started in the spring of this year with two weekend building workshops. Throughout the summer a series of Eco Experience holiday participants worked on the structure while learning new sustainable building skills. More recently 45 of Ennistymon’s Scoil Mhuire, Convent of Mercy School transition students tried out the cob stomping techniques while experiencing a series of interactive taster workshops. So it really is a community building experience. So far almost 100 people have worked on the structure and it’s looking really pretty. All the windows have now been added and soon it will be time to build on the turf roof.