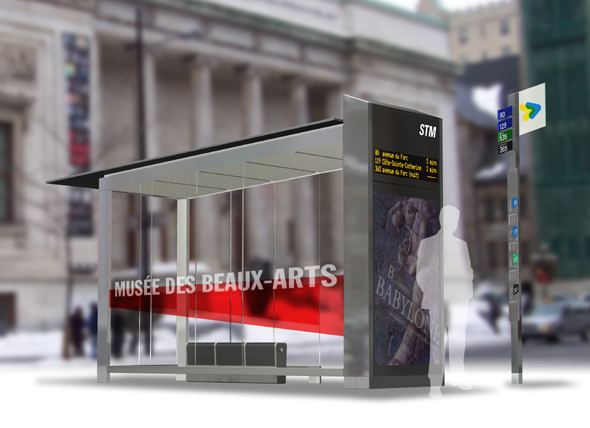 The Mayor of Montréal, Gérald Tremblay, has unveiled the winning concept in the city bus shelter design competition, submitted by the consortium Leblanc + Turcotte + Spooner. The competition was for the design of a new bus shelter incorporating various elements including an advertising poster frame, a bench and a solar power system. The STM plans to have 400 new shelters built for installation all across its network, gradually replacing the current models and responding to new needs.

“Our administration is convinced of the structure-enhancing potential of design to improve citizens’ quality of life as well as their living environment,” Mayor Tremblay said. “At the Rendez-vous November 2007″”Montréal, Cultural Metropolis, the city made a firm commitment to making such competitions a widespread practice, promoting innovation and excellence in architecture and design, and continuing to position Montréal as a UNESCO City of Design. This project is a concrete illustration of our willingness to ensure that Montréal’s designers play a paramount role in shaping our city’s future.

Drawing inspiration from the STM’s newly minted brand signature, “Mouvement collectif,” the design proposal by Leblanc + Turcotte + Spooner offers a modular, scalable solution. Featuring a self-supporting structure, the concept enables the manufacturing of base models, with the possibility of joining several units together to create variable-size configurations that can accommodate larger or smaller numbers of users.

The design features a communications column, which could house various components including dynamic digital displays and backlit advertising posters. An integrated solar power system will ensure lighting of shelters that cannot be connected to the power grid.

The jury was especially impressed with the potential for integration and modular construction afforded by the winning team’s proposal. In a statement, jury co-chairs Denise Vaillancourt, Executive Director, Planning, Marketing and Communications, STM, and Gilles Saucier, architect and partner in the firm Saucier + Perrotte, noted: “This preliminary design offers a comprehensive array of solutions to the complex problems with which the competing designers were presented. The concept incorporates current technologies, and meets the STM’s comfort and safety requirements.”

The STM will issue a call for tenders by this spring for the manufacturing of prototypes for the bus shelter and its various components. The firm selected will be required to enlist the services of the winning design firm. In addition, the STM will conduct its own evaluation of the prototypes and survey its users to gauge their appreciation of the design.

This design competition is one of the five shukôs, or creative challenges, issued on September 30, 2008, by the Mayor of Montréal during the Pecha Kucha Night for Elected Officials. Besides providing tangible impetus for creativity in design and architecture, it aims to widen access to public design commissions to greater numbers of practitioners. The competition was run by the Design Montréal office of the Ville de Montréal in conjunction with the STM.