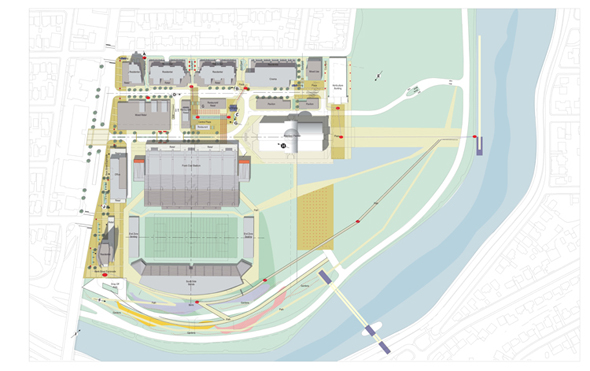 The Ottawa Sports and Entertainment Group (OSEG) has unveiled the designs for the stadium and mixed-use area for the proposed redevelopment of Lansdowne. The goal of architects Ritchard Brisbin, Barry Hobin and Robert Claiborne of Cannon Design in Toronto, was to create an urban space that reflects Lansdowne’s long history as a city, regional and national meeting place. The design respects the 150-year history of the site, create a lively urban space and fits into its Glebe neighbourhood.

On game nights (and days) the new stadium will host up to 24,000 fans with the capability to expand to 45,000 for major events such as the Grey Cup or a top drawing concert. The elevation of the South side has been lowered to improve sightlines from old Ottawa and tapered to provide more seats in the best viewing areas. It also features approximately 30 suites and 700 Club Seats.

Ottawa’s new stadium has been designed to ergonomically blend with and grow from its surroundings with a natural wood façade that celebrates Ottawa’s heritage as a lumber town. Pedestrians, cyclists and joggers will be able to experience its unique design without fences or other obstructions, year-round.