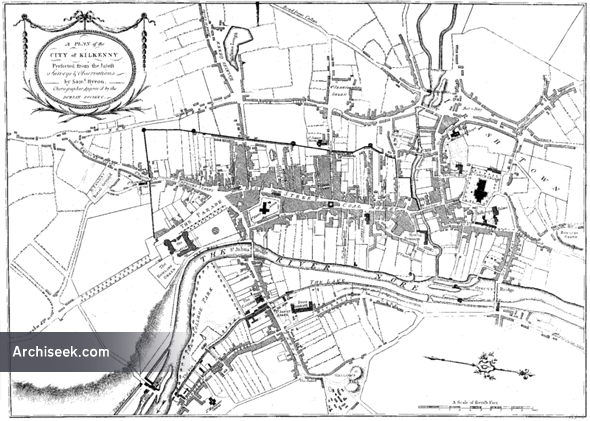 Receives its name from the fact that the citizens practised archery at “Butts” on the green.

This street had an entrance to the Dean’s residence before the construction of the Coach Road.

A very old street known as Walkin Street until quite recently. The origin of the name is uncertain.

One of Kilkenny’s famous slips, was probably gained its name because of the veterinary surgeons who practised here and the horses who exercised there.

During the eighteenth century this was a refuge of the dispossessed farming folk and other travelling people. A gallows also functioned in John’s Green, from which its former name of Gallow’s Green derives.

Named after St. Kieran’s Well and site of an ancient church at the northern end. Previously named Low Lane, Back Lane, King Street and Kieran Street.

This is named after the Confederate Parliament of 1641 – 1648, it was earlier called the Coal Market.

Patrick Street leads from the Parade to the Waterford road, through the former St. Patrick’s Gate named after the old St. Patrick’s Church.

Constructed around 1700 by John Pennefeather, a local land owner.

Traditionally the street of the inns but appears on old documents as Rozyn, derivation uncertain

Where butter was sold for centuries on market days.

An entry in the Chapter Book of St. Canice’s Cathedral dates September 20th 1689 notes that a coachway be made from Dean Street to the south door of the cathedral for the convience of the Duke of Ormonde.