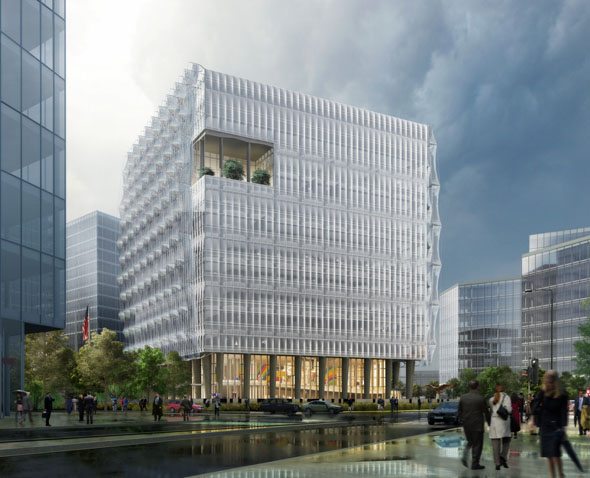 The U.S. Ambassador to the United Kingdom, Louis B. Susman, and Acting Director of the Bureau of Overseas Buildings Operations, Adam Namm, announced today that KieranTimberlake of Philadelphia, Pennsylvania has won the design competition for the New London Embassy.

KieranTimberlake’s design met the goal of creating a modern, welcoming, timeless, safe and energy efficient embassy for the 21st century. Their concept most fully satisfied the requirements outlined in the design competition’s mission statement. The concept holds the greatest potential for developing a truly iconic embassy and is on the leading edge of sustainable design. KieranTimberlake is an architectural firm known for its commitment to innovation and environmental responsibility.

Starting with 37 architectural submissions, the Bureau of Overseas Buildings Operations narrowed the number to a shortlist of nine firms. A distinguished jury of both American and British leaders in the fields of architecture, academia and diplomacy selected four firms for the final phase of the competition.

The four firms explored the symbolism of the embassy, its presence and position in the cityscape of London. Their goal was to create a building and site complex with a timeless quality to appropriately represent the United States of America in the United Kingdom.

The four competing architectural firms Kieran Timberlake, Morphosis Architects, Pei Cobb Freed & Partners, and Richard Meier & Partners worked for nearly a year and made presentations to the jury which then recommended the winning design.

As KieranTimberlake moves forward with the design of the building, the Bureau of Overseas Buildings Operations and Kieran Timberlake will be actively engaged in the consultation and planning process involving the Mayor’s office, the Wandsworth Borough Council, the Commission for Architecture and the Built Environment, as well as residents in the area to ensure that the new embassy provides an appropriate home for the United States of America in London.

The anticipated ground breaking on this landmark embassy will be in 2013 with a goal to complete the construction in 2017.

The concept for the New London Embassy is the result of KieranTimberlake’s efforts to resolve, in architectural terms, what an embassy aspires to be and what present realities dictate it must do.

The expressive challenge is to give form to the core beliefs of our democracy – transparency, openness, and equality – and do so in a way that is both secure and welcoming. At the same time, the building must confront the environmental challenges all nations face with leading edge sustainable design.

The design places the embassy building at the center of the Nine Elms site and develops the surrounding area into an urban park. The new embassy meets all the required security standards while honoring the English tradition of urban parks and gardens as the context for many civic buildings. The new embassy, with its gardens, will establish a strong framework for the urbanization of the Nine Elms redevelopment zone.

In the form and expression of the New London Embassy, KieranTimberlake seeks a holistic fusion of urbanism with site, of building and landscape. KieranTimberlake seeks a new embassy that is both evocative and that performs, one that represents our democracy and our relationship with the United Kingdom and at the same time conserves and produces energy.